THE BATTLE OF THE GIANTS - A Maori Legend of New Zealand 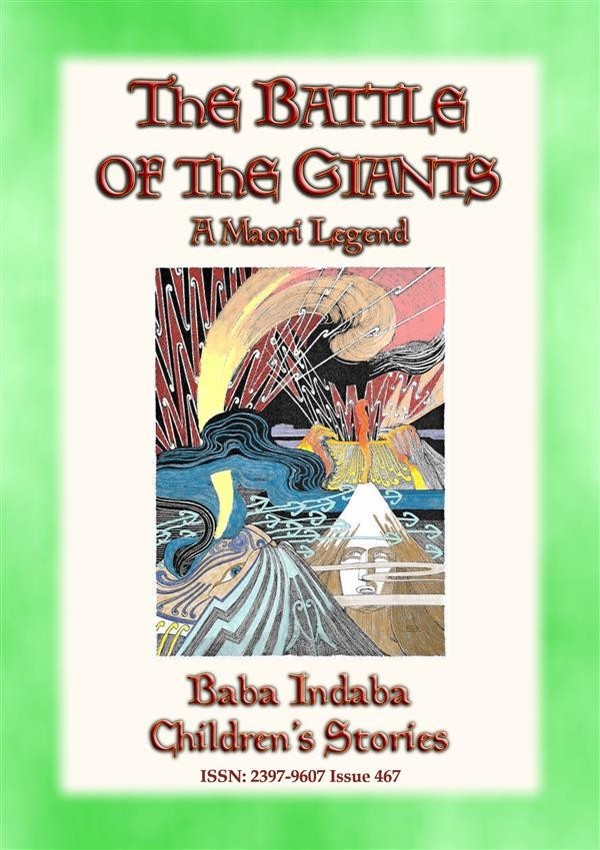 THE BATTLE OF THE GIANTS - A Maori Legend of New Zealand

ISSN: 2397-9607 Issue 467
In this 467th issue of the Baba Indaba’s Children's Stories series, Baba Indaba narrates a Maori Legend - "The Battle of the Giants”.
Once, there was a spirit who wandered along the path that leads to gladden the heart of man; and her name was Ngawai (pronounced Nah-wai). This is her story…..
Once the volcanoes Taranaki, Ruapehu, and Tongariro dwelled together. That was the time when Tongariro in her wonderful beauty had captured the fiery hearts of the two giants, so that their joy filled the heavens with majestic outbursts and covered the earth with their dark-glowing heart-blood of fiery lava and molten stones.
The snows of the winter and the suns of the summer came and went from the first time, to the hundredth time, to the thousandth time, and still Tongariro was undecided whom she would prefer for a husband - the straight and simple Taranaki and the rugged and strong Ruapehu.
Tongariro roused the passions of the giants: she made the volcanoes tremble! Their blood of fire and boiling stones shook them, the thundering of their voices, roaring insults at each other, made the earth tremble. Streams of lightning pierced the nights, and black smoke of deadly hate darkened the days, and the ears of man were filled with the roaring hate of the giants, and their wondering eyes beheld the beauty of Tongariro, smiling at both! At last the two rivals decided to fight for Tongariro!

What happened next? Who won the right to marry Tongariro – Taranaki or Ruapehu? What happened to the lands surrounding them and how did this affect the Maori people? To find the answers to these questions, and others you may have, you will have to download and read this story to find out!
INCLUDES LINKS TO DOWNLOAD 8 FREE BABA INDABA STORIES
Baba Indaba is a fictitious Zulu storyteller who narrates children's stories from around the world. Baba Indaba translates as "Father of Stories".
Each issue also has a "WHERE IN THE WORLD - LOOK IT UP" section, where young readers are challenged to look up a place on a map somewhere in the world. The place, town or city is relevant to the story. HINT - use Google maps.
It is our hope that in looking up these place names, using Google Maps, that young people will be able to see images and read about other peoples and cultures from around the world. Through this activity, it is also our hope that young people will not only increase their world geography but also increase their understanding and tolerance of other people and cultures.
BUY ANY of the 450+ BABA INDABA CHILDREN’S STORIES at https://goo.gl/hRYz7L
10% of the profit from the sale of this book will be donated to charities.
===========
KEYWORDS/TAGS: Baba Indaba, Children’s stories, Children’s Books, Folklore, Fairy, Folk, Tales, bedtime story, legends, storyteller, fables, moral tales, myths, happiness, laughter, Aotearoa, New Zealand, fairy tales for kids, around the world, nursery rhymes, fairy tales story, fairy tales book, short fairy tales, answer, Beautiful, beauty, black, boiling, break, broken, burn, burst, capture, cloud-piercing, cone, conqueror, cover, deep, earth, endless, enemy, fiery, fight, fill, fire, fires, friend, generations, giants, gold-bordered, golden, grim, hate, hearts, heavens, highest, howl, husband, Incantations, inside, lake, loud, love, magnificence, majestic, Maori, melt, melting, molten, mountain, mountain-world, mouth, new-born, Ngawai, pain, passion, glowing, path, Patupaiarehe, people, rage, roaring, rolling, rose, Ruapehu, sea, shook, silence, silent, silver-white, snow, steam, steam-column, stones, stone-wilderness, stood, straight, strength, sun, swallow, swaying, Taranaki, Te-marama, terrible, thunder, Tongariro, Tongariro, tremble, volcanoes, wander, water, wonderful, world