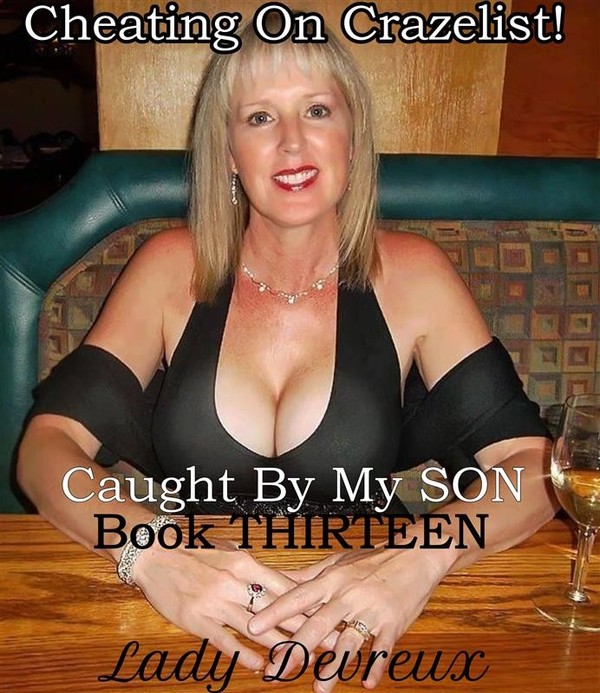 Susan likes to have sex with couples. Her political husband ignores this, as long as she keeps it quiet- as nobody votes for a cuckold. When her regular couple decides to move, Susan decides to find some new playmates online. What happens when her playmate turns out to be her sons' girlfriend?
Excerpt
Now, though, my son was way past the time of being a barely legal adult with little practical experience with women. I had no idea to know how many women he had been with, but considering he had physical traits that most women are attracted to- he was tall, not fat, with blue eyes and black hair- I knew that the chances were he had gotten the chance to play with a woman who had tits my size or bigger. And since he was thirty four now, if he did favor older women for his play time, then he was at the exact right age where he could have as many of them as he wanted: not too young, but not too old to appeal to a desire for young dick, either.
So why would he be obsessed with looking at my chest?
“Is that why you stopped coming home for Sunday dinner?” I asked.
Even with all the arguments, for a long time, my son still came home to eat Sunday dinner with us as a family. Now that I thought about it, this had stopped about two months after I had gotten the augmentation done. I had thought then that maybe he simply didn’t have the time anymore, but now I knew the real reason.
He was embarrassed to be looking at my chest.
“What?” Chris said, “What do you mean?”
“Well, if you feel embarrassed that you were looking at my tits, now I know why,” I said, “I-”
“No, I stopped coming because I am sick of being told what to do by dad and Sissy,” Chris said, anger in his voice- I had tripped a nerve, “It had nothing to do with the fact that your chest was suddenly perfect!”
Even Jessica looked at him when he made that slip in his words- he hadn’t said big, he had said perfect, and I knew that I had been one hundred percent correct.
“Fine, mom,” Chris said, “You want to know the truth, too, okay then. I have fucked a lot of older women, because I can’t fuck you. There it is.”
I was expecting his girlfriend to jump in now, to say something- my son had just admitted he had a fetish for me, that he basically had been fucking me every time that he shoved his cock into some older woman’s pussy.
“I can understand,” Jessica said, “It’s okay, Chris. Really, it is. I am not jealous, and I have the same fetish, too.”
My son and his girlfriend both have a mommy fetish. I doubted I looked like this girls mother, but then again, how could either one of them say outright that they wanted to fuck their own mothers- even if by proxy?
As soon as she said that, for the briefest moment, Chris’ eyes lit up with a look of pure love towards Jessica. It is rare when two people with the same dirty fetish, especially a mommy fetish, meet up and are able to talk about it openly. Yes, maybe so many older women had the same fetish in reverse, but they never admitted it, no more than the young men they fucked confessed to it, either.
“The only way to solve a problem is to confront it head on,” Chris said, his broad laborer’s hands reaching for the belt buckle that he wore, “Well, I can’t get past this. So here is the deal, mom: you either fuck my girlfriend, and me, or I am going to call the press and tell them that the wife of the state senator is a swinger.”