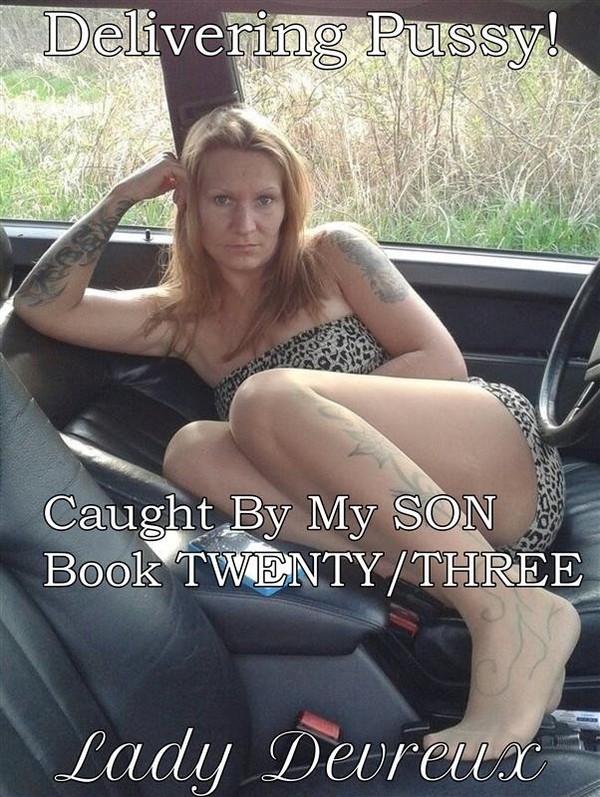 Kendra discovered there is little money and a lot of competition in driving- but that an enterprising woman can make real cash if she delivers more than food! Using the app, she brings her fish taco to couples looking for some mff- what happens when her son and his girlfriend place an order?
The twenty-third book of the Caught By My Son series.
Excerpt

I was not surprised that we were being joined by Judy’s boyfriend- she was in a couple, after all- but I was not expecting to see my son standing there!
Marley looked from his girlfriend, to me- our eyes met, and I didn’t know what to say or what to expect!
I have never told my son, or anyone else in my family, what I do on the side. Maybe the fact that I am bisexual would not surprise them- after all, a lot of people look at me and they think that I am a lesbian- but that did not mean that he expected to walk in on me being pleasured by another woman.
Let alone his girlfriend.
My son stood there, all six foot three of him- like me, he is tall and thin, a wiry built young man who has medium length blonde-brown hair. He was wearing as much as I was, absolutely nothing, and just as he could not help himself in looking at my naked body, my eyes did scan down from the tops of his shoulders to the place between his legs where he carried a very nice, very thick cock.
He had of course expected to walk out, and join his girlfriend and whatever woman they had ordered in bed together, not to walk in on his naked mother!
“Well,” Judy said- she must not see the connection between us, “What do you think?”
Is she asking me, is she asking him?
Her eyes looked from me, to my son- she was expecting something other than just two blank stares!
How do I even answer that question?
“So,” Judy said- maybe she did not understand the familial link between us, but she could sense that something was wrong, “Is everything okay- Marley?”
Thankfully, she had asked him to answer- of course, he was her boyfriend, the one that she was in a relationship with!
My son’s blue eyes met my own- he stared into my eyes, as he chose how to answer this question.
A man who turns down a threesome with two women, is either religious or super gay- since nobody could ever accuse Marley of the first one, if he turned down having the opportunity to fuck his girlfriend and another woman at the same time than she would assume the second one. The only way he could get out of this was to explain that we were not simply random strangers, but mother and son, and there was no way that we could possibly do anything sexually together.
And I am the mother that he had brought her down here to meet.
Meeting your boyfriend’s mother is as important an event for the girlfriend as it is for the mother- what would she say if she knew the truth?
That the mother of your serious boyfriend is a part time prostitute?
“Marley?” Judy asked again- the pause had become long enough that it was becoming noticeable, “You did want to do this, right?”
Say something- I don’t know what- but say something, Marley!