Heimskringla; Or, The Chronicle of the Kings of Norway 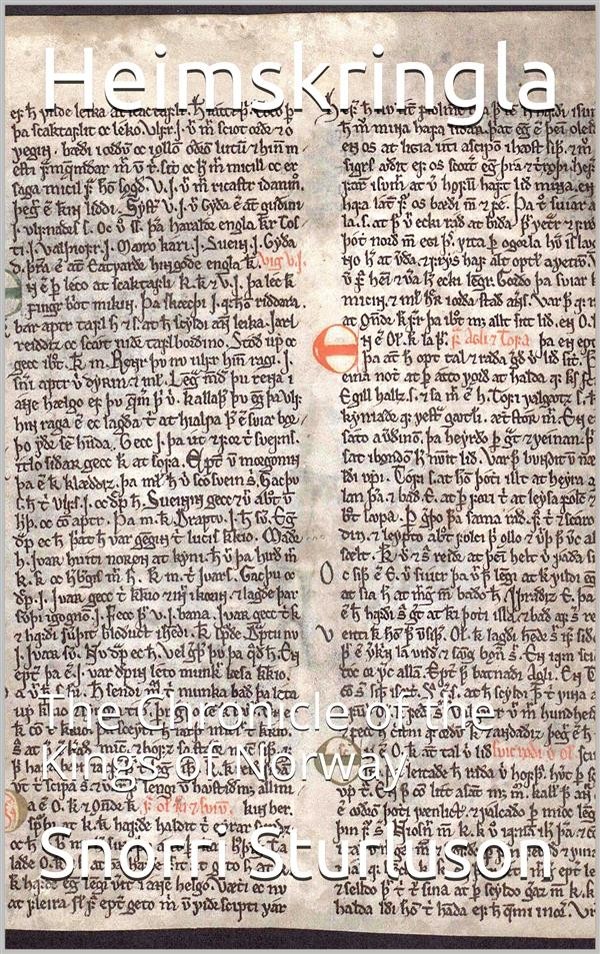 Heimskringla; Or, The Chronicle of the Kings of Norway

The single surviving page known as the Kringla leaf is kept in the National and University Library of Iceland. The cover page of this book has been made from that rare page.

The "Heimskringla" of Snorri Sturlason is a collection of sagas concerning the various rulers of Norway, from about A.D. 850 to the year A.D. 1177.

Heimskringla is the best known of the Old Norse kings' sagas. It was written in Old Norse in Iceland by the poet and historian Snorri Sturluson (1178/79–1241) ca. 1230. The name Heimskringla was first used in the 17th century, derived from the first two words of one of the manuscripts (kringla heimsins, "the circle of the world").


Heimskringla is a collection of sagas about Swedish and Norwegian kings , beginning with the saga of the legendary Swedish dynasty of the Ynglings, followed by accounts of historical Norwegian rulers from Harald Fairhair of the 9th century up to the death of the pretender Eystein Meyla in 1177. The exact sources of his work are disputed, but included earlier kings' sagas, such as Morkinskinna, Fagrskinna and the twelfth century Norwegian synoptic histories and oral traditions, notably many skaldic poems. Snorri had himself visited Norway and Sweden. For events of the mid-12th century, Snorri explicitly names the now-lost work Hryggjarstykki as his source. The composition of the sagas is Snorri's.


The earliest parchment copy of the work is referred to as Kringla. It voyaged from Iceland to Bergen, Norway and was moved to Copenhagen, the University Library. At that time it had lost the first page, but the second (the current beginning of the Ynglinga saga) starts Kringla heimsins, "the Earth's circle" of the Laing translation.

Heimskringla consists of several sagas, often thought of as falling into three groups, giving the overall work the character of a triptych. The saga narrates the contests of the kings, the establishment of the kingdom of Norway, Viking expeditions to various European countries, ranging as far afield as Palestine in the saga of Sigurd the Crusader. The stories are told with a life and freshness, giving a picture of human life in all its reality. The saga is a prose epic, relevant to the history not only of Scandinavia but the regions included in the wider medieval Scandinavian diaspora. The first part of the Heimskringla is rooted in Norse mythology; as the collection proceeds, fable and fact intermingle, but the accounts become increasingly historically reliable.

The first section tells of the mythological prehistory of the Norwegian royal dynasty, tracing Odin, described here as a mortal man, and his followers from the East, from Asaland and Asgard, its chief city, to their settlement in Scandinavia (more precisely to east-central Sweden, according to Snorri). The subsequent sagas are (with few exceptions) devoted to individual rulers, starting with Halfdan the Black.