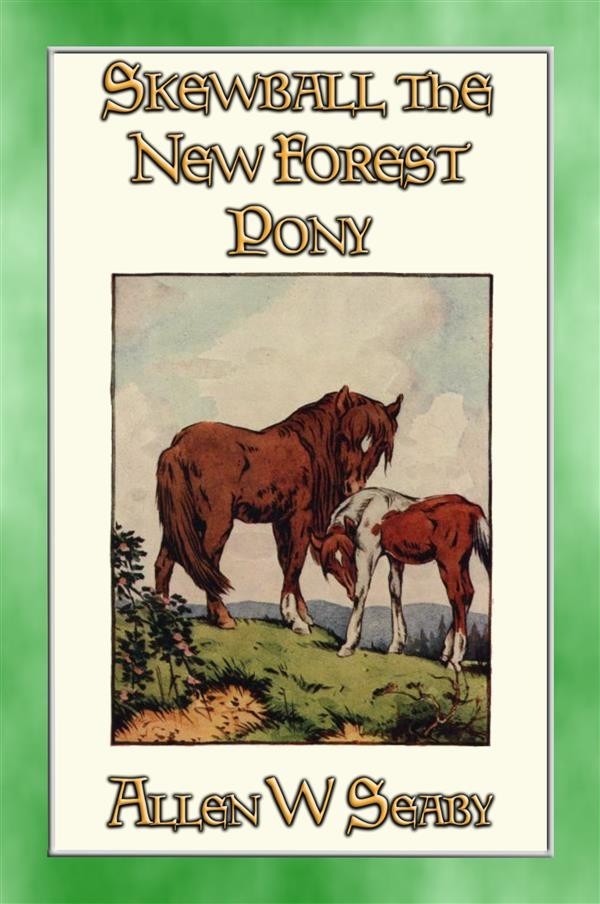 Everyone who has journeyed from Southampton to Bournemouth by road or rail, knows a great part of the forest is open heath or moorland; but, unlike the barren wilds of the Scottish Highlands, the New Forest has also extensive woods full of gigantic oaks and beeches
The heather the year of Skewbald’s birth was of a brilliance such that the oldest forest man declared he had never seen equalled.

During the summer the ponies explored the forest congregating near the streams and ponds water, enjoying the splashing of their hoofs as they walked in the stream, while their elders stood fetlock-deep! How refreshing to take a deep drink, head and neck inclined at just the right angle so that the nostrils were clear of the water, followed by a snort of content!

The waning of September, with its sunny days, cold nights, and morning mists, made little difference to the ponies’ daily routine. Apparently they were as free to go where they listed as any wild Western herd. But their owners kept an eye on them, and left them there or had them “caught in,” as they pleased.

Later in the year strings of ponies would wend their way to the Brockenhurst sales, but it chanced that the owner of the bay, leader of the herd, in which Skewbald ran, decided to have him in before he got busy catching other people’s ponies, which was always the case towards the end of the year, as he was an adept at the game……and so began Skewbald’s adventure…..
10% of the publisher’s profit will be donated to Charities.
-------
KEYWORDS/TAGS: skewbald, new forest, pony, adventure, beeches, branding, brilliant, broken leg, Brokenhurst, changing the brand, Chase, death on the road, escaped, firebell, Foal, Hampshire, heather, Herd, in trouble, jumping, Labour, leaders, mines, morning mist, neighbours, new-comers, oaks, Pit pony, ring, rival, sales, skewbald the swift, Southampton, wanderers, winter, woods,