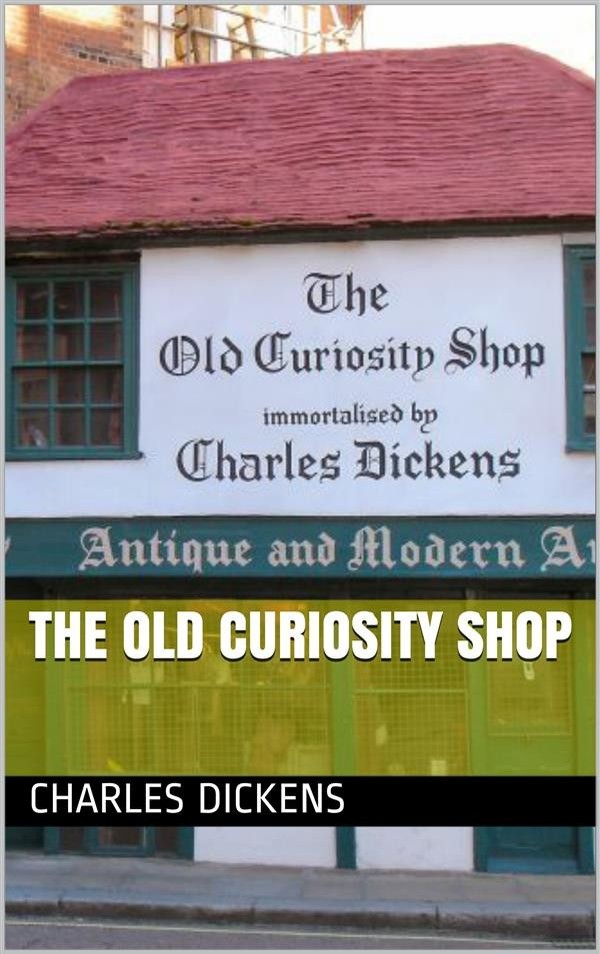 (The cover image of this book has been taken from real shop. See below:)
A shop named 'The Old Curiosity Shop' can be found at 13–14 Portsmouth Street, Holborn, London, WC2A 2ES, amongst the buildings of the London School of Economics. The building dates back to the sixteenth century in an area known as Clare Market, but the shop name was added after the novel was released, as it was thought to be the inspiration for Dickens's description of the antique shop. At one time it functioned as a dairy on an estate given by King Charles II to one of his many mistresses. It was built using timber from old ships, and survived the bombs of the Second World War.


The Old Curiosity Shop is one of two novels (the other being Barnaby Rudge) which Charles Dickens published along with short stories in his weekly serial Master Humphrey's Clock, from 1840 to 1841. It was so popular that New York readers stormed the wharf when the ship bearing the final installment arrived in 1841. The Old Curiosity Shop was printed in book form in 1841.

The plot follows the life of Nell Trent and her grandfather, both residents of The Old Curiosity Shop in London.

Queen Victoria read the novel in 1841, and found it "very interesting and cleverly written".

The events of the book seem to take place around 1825. In Chapter 29 Miss Monflathers refers to the death of Lord Byron, who died on 19 April 1824. When the inquest rules (incorrectly) that Quilp committed suicide, his corpse is ordered to be buried at a crossroads with a stake through the heart, a practice banned in 1823. Nell's grandfather, after his breakdown, fears that he shall be sent to a madhouse, and there chained to a wall and whipped; these practices went out of use after about 1830. In Chapter 13, the lawyer Mr. Brass is described as "one of Her Majesty's attornies" [sic], putting him in the reign of Queen Victoria, which began in 1837, but given all the other evidence, and the fact that Kit, at his trial, is charged with acting "against the peace of our Sovereign Lord the King" (referring to George IV), this must be a slip of the pen.

The Old Curiosity Shop tells the story of Nell Trent, a beautiful and virtuous young girl of "not quite fourteen". An orphan, she lives with her maternal grandfather (whose name is never revealed) in his shop of odds and ends. Her grandfather loves her dearly, and Nell does not complain, but she lives a lonely existence with almost no friends her own age. Her only friend is Kit, an honest boy employed at the shop, whom she is teaching to write. Secretly obsessed with ensuring that Nell does not die in poverty as her parents did, her grandfather attempts to provide Nell with a good inheritance through gambling at cards. He keeps his nocturnal games a secret, but borrows heavily from the evil Daniel Quilp, a malicious, grotesquely deformed, hunchbacked dwarf moneylender. In the end, he gambles away what little money they have, and Quilp seizes the opportunity to take possession of the shop and evict Nell and her grandfather. Her grandfather suffers a breakdown that leaves him bereft of his wits, and Nell takes him away to the Midlands of England, to live as beggars.