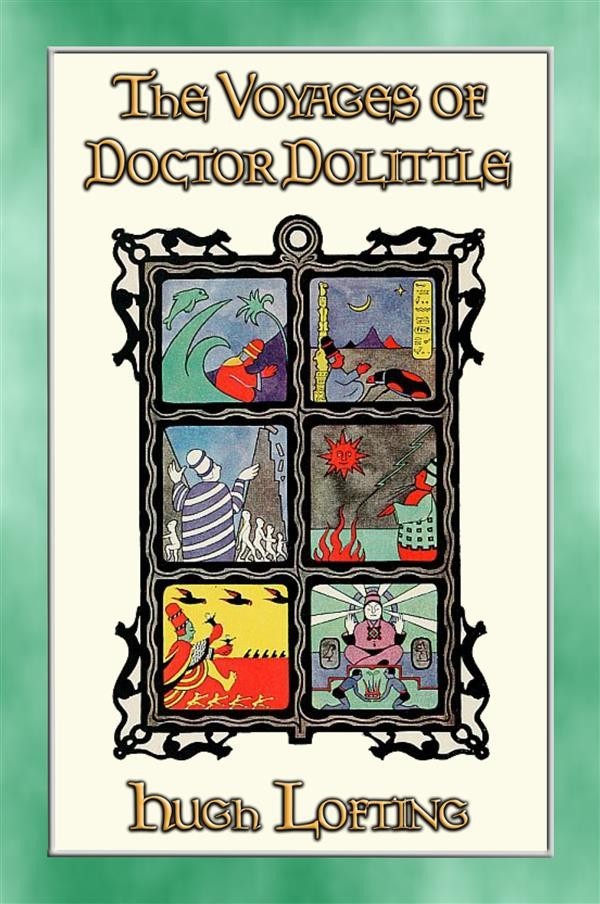 The Voyages of Doctor Dolittle is the second in Hugh Lofting’s Doctor Dolittle series of books. Written and illustrated by Lofting it is nearly five times as long as book one and the writing style is pitched at a more mature audience. The scope of the novel is vast; it is divided into six parts and the illustrations are also more sophisticated. Lofting was one of the first winners of the Newbery Medal for 1923.
It was one of the novels in the series which was adapted into the film Doctor Dolittle.
The novel begins when Tommy Stubbins, the narrator of the story, finds a squirrel injured by a hawk. Matthew Mugg, the cat's meat man, informs him to get help from Doctor Dolittle, who can speak the language of animals. The Doctor is away but on his return he attends to the squirrel. Tommy is introduced to some of the strange animals in Doolittle's care, such as the Wiff-Waff fish, and those who care for his household, such as Dab-Dab the duck, and Jip the dog. Polynesia the parrot arrives in Puddleby from Africa informs the Doctor that Bumpo is studying in Bullford.
Tommy begins his studies with Doolittle, and Polynesia teaches Tommy the language of animals. Chee-Chee comes from Africa disguised as a lady and tells about his voyage. The Doctor acquires The Curlew and is thinking of taking Tommy, Polynesia, and Luke the Hermit. They find out from the hermit's dog, Bob, that he was sent to prison for murder but Bob is a witness so when the court is in the process the Doctor proves to the judge that he can talk to animals when this is settled he translates Bob's story to English. When the story is finished the judges conclude that the hermit is innocent.
But all this is a prelude to the voyages of Doctor Dolittle. In their first journey, the Purple Bird of Paradise informs the Doctor that Long Arrow, son of Golden Arrow, who is a friend of the Doctor, is missing so after they play the game Blind Travel, which would determine where in the world they would voyage. And so the Voyages of Doctor Dolittle begin…….
==============
KWYWORDS/TAGS: Doctor Dolittle, voyages, Africa, anchor, animals, Puddleby, village, Tommy Stubbins, narrator, story, squirrel, injury, hawk, Matthew Mugg, cat's meat man, language of animals, strange animals, Wiff-Waff fish Dab-Dab the duck, Jip the dog, Polynesia the parrot, Puddleby, Bumpo, Bullford, Chee-Chee, disguise, Curlew, Luke the Hermit, Bob the dog, prison, witness, trial, court, judge, translate, innocence, journey, Purple Bird of Paradise, Long Arrow, son, Golden Arrow, Africa, animals, Bag-jagderags, beetle, Ben, Bill, birds, Brazil, bullfight, Bumpo, canoes, Capa, Cheapside, chief, coast, court-room, creature, crown, Deep, disappear, Doctor, dog, Dolittle, Don, enemy, England, English, Enrique, Fidgit, fish, funny, gentle, glass, gold, Hole, Honor, horns, Indian, Indians, island, Jabizri, Jip, Joe, John, Jong, king, language, Long, Luke, Matthew, men, Mendoza, message, Miranda, mountain, naturalist, Oxford, palace, pencil, Pepito, pocket, Polynesia, Popsipetel, porpoises, prison, Puddleby, Purple, seaman, shellfish, ship, shop, shores, snail, Spidermonkey, stone, straight, Stubbins, sun, tail, theatre, throne, to-morrow, town, tremendous, village, water, whisper, wings, wonderful, world, zoo