The Printer in Eighteenth-Century Williamsburg / An Account of his Life & Times, & of his Craft 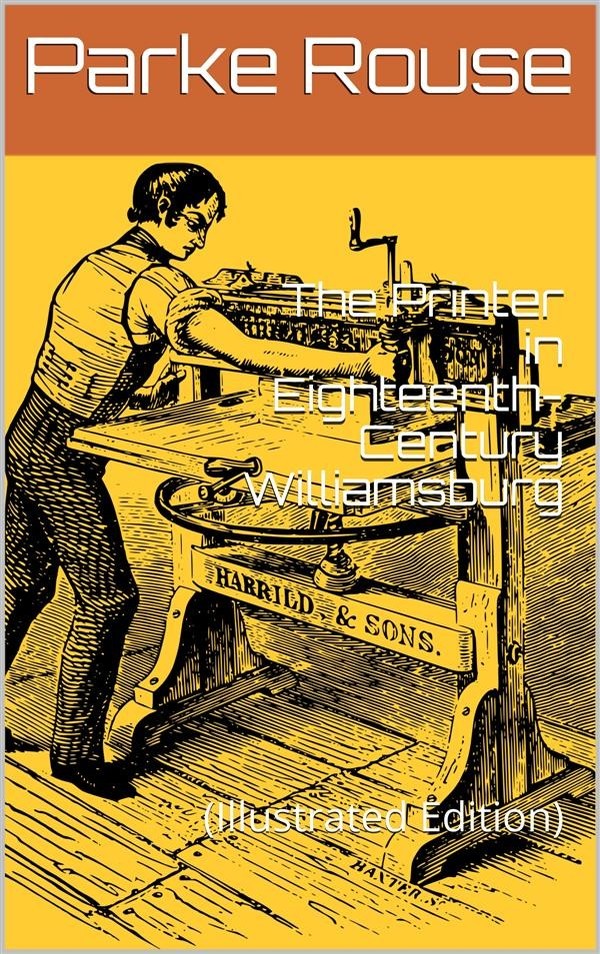 The Printer in Eighteenth-Century Williamsburg / An Account of his Life & Times, & of his Craft

The paragraphs on this Page and the next have been set in an eighteenth-century Manner. The Type used is Caflon, developed in the early Part of the eighteenth Century by William Caflon, the greatest of the English Letter Founders.

Although Caflon is famous for the beautiful Type that bears his Name, he deserves equal Credit for designing some of the most handsome Type Ornaments or “Flowers” ever developed, before or after his Time. Such Type Flowers had many U?es—to embelli?h Initial Letters at the Beginning of a Chapter in a Book; as decorative Devices in a single Row over a Type Heading ?arting a new Page in a Book; or over Headings each Time a new Subject was introduced in a Text. Flowers were ca? to all the regular Bodies of the Letter from the small (Nonpareil) to the large (Great Primer) Size. The Type Flowers u?ed at the Head of this Page, in the built-up Initial opening the firs Paragraph, and elsewhere in this Publication are reproduced from original eighteenth-century Flowers excavated at the Site of the Printing Office on Duke of Glouceser Street in Williamsburg.

Printers alfo applied, through much of the Century, some Rules of Style which the modern Reader may find odd if not awkward. For Example, they began all Nouns with a capital Letter, thus distinguishing them from other Parts of Speech such as Adjectives, Verbs, &c. In the same Fashion, they capitalized Expressions of particular Emphasis, and Titles of Honor and Eminence. The Names of Persons and Places they not only began with capital Letters but usually set in Italic Type as well.

With the exception of certain Scottish faces, small Capitals were found in Roman Fonts of Type only. They were employed to denote Emphasis and Strets, and were used where the large Capitals would not fit, i.e., were too long. Small Capitals were also found in the first Word of the first Paragraph after every Break in Context of a Chapter or Section of Text.

Strange though some eighteenth-century Printing may appear to today’s Reader, there is one Point that should be ?re??ed. The Idiofyncracies of a Type Page of the Period were not merely Whims of individual Printers. They were the Fashion of the Time. When a Printer used several Sizes and Styles of Type on a Page, he was practicing what he and his Contemporaries considered to be good Typography.