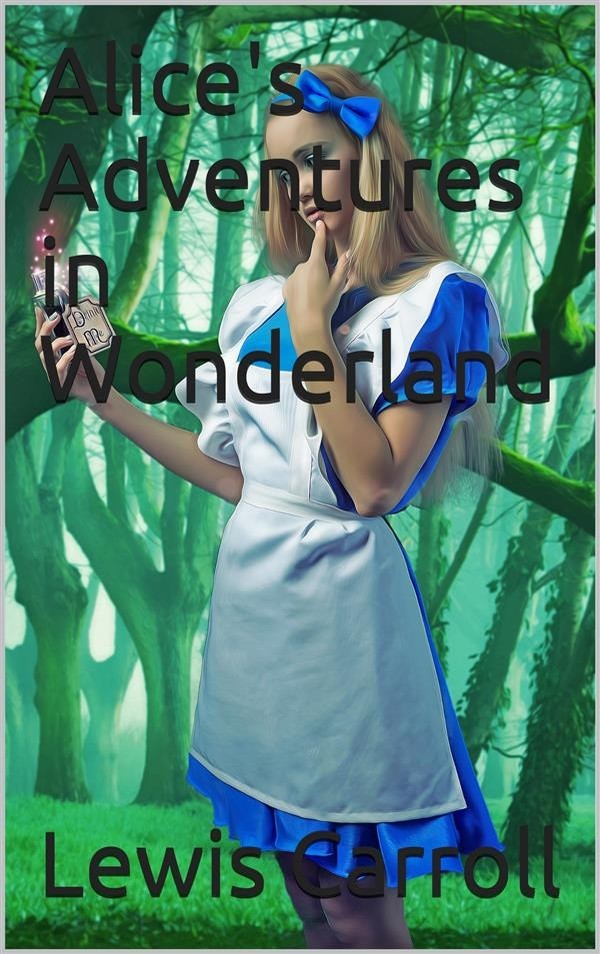 Alice's Adventures in Wonderland (commonly shortened to Alice in Wonderland) is an 1865 novel written by English author Charles Lutwidge Dodgson under the pseudonym Lewis Carroll. It tells of a young girl named Alice falling through a rabbit hole into a fantasy world populated by peculiar, anthropomorphic creatures. The tale plays with logic, giving the story lasting popularity with adults as well as with children. It is considered to be one of the best examples of the literary nonsense genre. Its narrative course, structure, characters, and imagery have been enormously influential in both popular culture and literature, especially in the fantasy genre.

Chapter One – Down the Rabbit Hole: Alice, a girl of seven years, is feeling bored and drowsy while sitting on the riverbank with her elder sister. She then notices a talking, clothed White Rabbit with a pocket watch run past. She follows it down a rabbit hole when suddenly she falls a long way to a curious hall with many locked doors of all sizes. She finds a small key to a door too small for her to fit through, but through it she sees an attractive garden. She then discovers a bottle on a table labelled "DRINK ME," the contents of which cause her to shrink too small to reach the key which she has left on the table. She eats a cake with "EAT ME" written on it in currants as the chapter closes.

Chapter Two – The Pool of Tears: Chapter Two opens with Alice growing to such a tremendous size her head hits the ceiling. Alice is unhappy and, as she cries, her tears flood the hallway. After shrinking down again due to a fan she had picked up, Alice swims through her own tears and meets a Mouse, who is swimming as well. She tries to make small talk with him in elementary French (thinking he may be a French mouse) but her opening gambit "Où est ma chatte?" ("Where is my cat?") offends the mouse and he tries to escape her.

Chapter Three – The Caucus Race and a Long Tale: The sea of tears becomes crowded with other animals and birds that have been swept away by the rising waters. Alice and the other animals convene on the bank and the question among them is how to get dry again. The Mouse gives them a very dry lecture on William the Conqueror. A Dodo decides that the best thing to dry them off would be a Caucus-Race, which consists of everyone running in a circle with no clear winner. Alice eventually frightens all the animals away, unwittingly, by talking about her (moderately ferocious) cat.