The Collected Works of William Hazlitt / Vol. 8 of 12 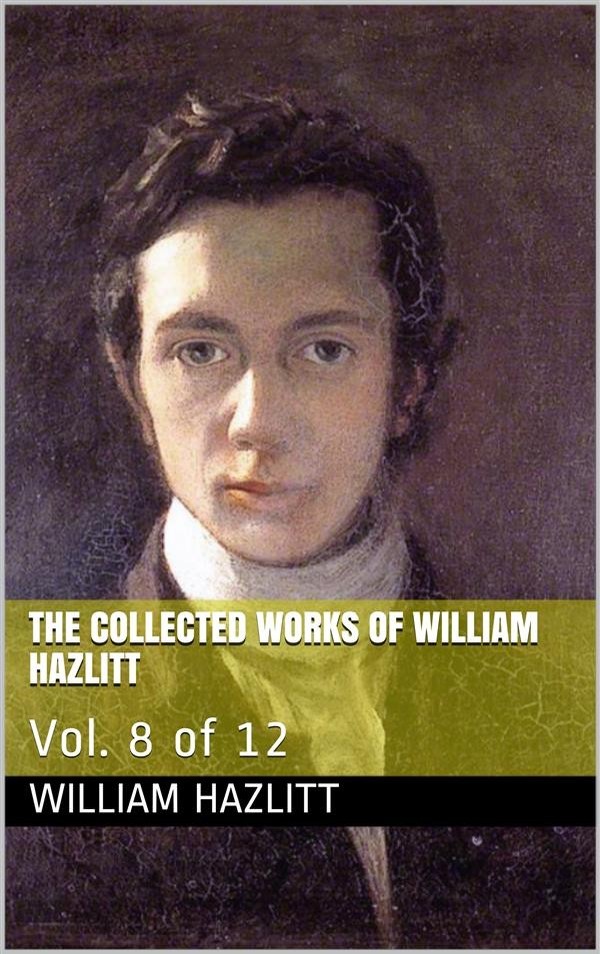 The Collected Works of William Hazlitt / Vol. 8 of 12

William Hazlitt (10 April 1778 – 18 September 1830) was an English essayist, drama and literary critic, painter, social commentator, and philosopher. He is now considered one of the greatest critics and essayists in the history of the English language, placed in the company of Samuel Johnson and George Orwell. He is also acknowledged as the finest art critic of his age. Despite his high standing among historians of literature and art, his work is currently little read and mostly out of print.

During his lifetime he befriended many people who are now part of the 19th-century literary canon, including Charles and Mary Lamb, Stendhal, Samuel Taylor Coleridge, William Wordsworth, and John Keats.

Around 1796, Hazlitt found new inspiration and encouragement from Joseph Fawcett, a retired clergyman and prominent reformer, whose enormous breadth of taste left the young thinker awestruck. From Fawcett, in the words of biographer Ralph Wardle, he imbibed a love for "good fiction and impassioned writing", Fawcett being "a man of keen intelligence who did not scorn the products of the imagination or apologize for his tastes". With him, Hazlitt not only discussed the radical thinkers of their day, but ranged comprehensively over all kinds of literature, from John Milton's Paradise Lost to Laurence Sterne's Tristram Shandy. This background is important for understanding the breadth and depth of Hazlitt's own taste in his later critical writings.

Aside from residing with his father as he strove to find his own voice and work out his philosophical ideas, Hazlitt also stayed over with his older brother John, who had studied under Joshua Reynolds and was following a career as a portrait painter. He also spent evenings with delight in London's theatrical world, an aesthetic experience that would prove, somewhat later, of seminal importance to his mature critical work. In large part, however, Hazlitt was then living a decidedly contemplative existence, one somewhat frustrated by his failure to express on paper the thoughts and feelings that were churning within him. It was at this juncture that Hazlitt met Samuel Taylor Coleridge. This encounter, a life-changing event, was subsequently to exercise a profound influence on his writing career that, in retrospect, Hazlitt regarded as greater than any other.