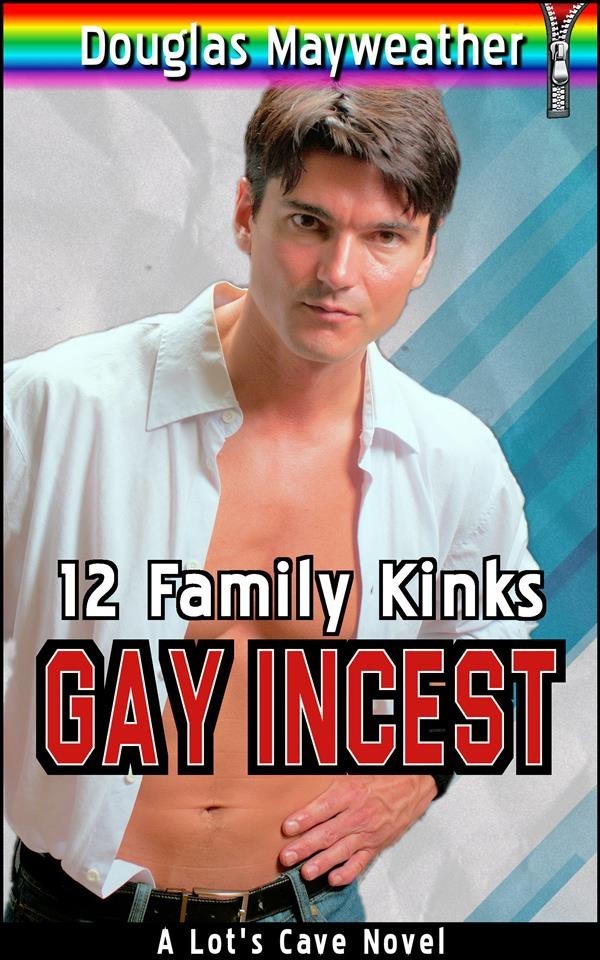 DESCRIPTION:
Twelve stories that explore these gay incest situations in explicit detail. Most of us have a personal whim that we hold dear. It’s something that makes us unique. For some people, these quirks take over certain aspects of their lives. When their sex life revolves around a gay incestuous relationship, add one of these kinks, such as voyeurism, cross-dressing, domination, jock smelling or a foot fetish, and things get really hot.

EXCERPT:
He went back to the bedroom and walked up to the bed. He gave Jordy a sharp slap on his buttocks, causing him to jump.

Startled, he splurted out, “Daddy.”

Longwood snarled, “You little queer. You need a lesson and I’m gonna give you one. You think you want this, huh?”

He was holding the base of his erect cock and waved it from side to side. Jordy looked at it with his eyes opened wide. He’d seen it soft but not hard. Now, up close, it looked larger than he’d imagined.

“Don’t lie to me boy. You’ve been doing everything you can think of to say you want it. Look at the lust on your face right now. Well, I’m gonna teach you that you don’t want it. When I’m through with you son, you won’t want anybody’s cock.”

He grabbed Jordy’s neck and pushed him down prone on the bed.

“Shut your mouth, bitch,” Longwood hissed. “I’m gonna fuck your boy pussy until you beg me to stop. See if you walk around here looking like a cheap hooker anymore.”

He twisted Jordy back over onto his stomach with his butt sticking up again. He put the head of his thick cock against Jordy’s hole and pushed. The discomfort surprised Jordy and caused him a jolt of panic.

Longwood snarled. “Shut up, boy. You want this. I know you do. You been begging for it. Well, here it is.”

He pushed and his cock went in. He pushed again and slid all the way in until he couldn’t go any farther. Jordy gasped and put his hand on his dad’s stomach, trying to hold him off, but it was too late.

Yates shook his head. “No, it isn’t a joke. It’s a serious situation, so you better take care of business, and better to do it out here on the patio.”

“You really want me to piss my pants? Really?”

He laughed. “You sick old man.”

“Oh? All that shit you were talking wasn’t sick? Just for that I just might tickle you until you piss.”

Zev shook his head. “No need. I gotta piss so bad there’s nothing else I can do. Here goes. Stand back.”

He closed his eyes and in seconds the crotch of his jeans began to turn a darker blue. The stain spread down his left leg. As it reached his knee the other pant leg began to darken. Streaks of wet blue streamed down and a pale-yellow puddle formed around his sneaker.

Yates groped himself and was mildly surprised to find his dick was erect. He squeezed it. Zev had opened his eyes and looked down at his wet jeans. He looked up at his dad and saw that he was rubbing his hardened cock.

“So that’s what this is about. This turns you on. That’s rich. Well, enjoy. I sure as hell did.”