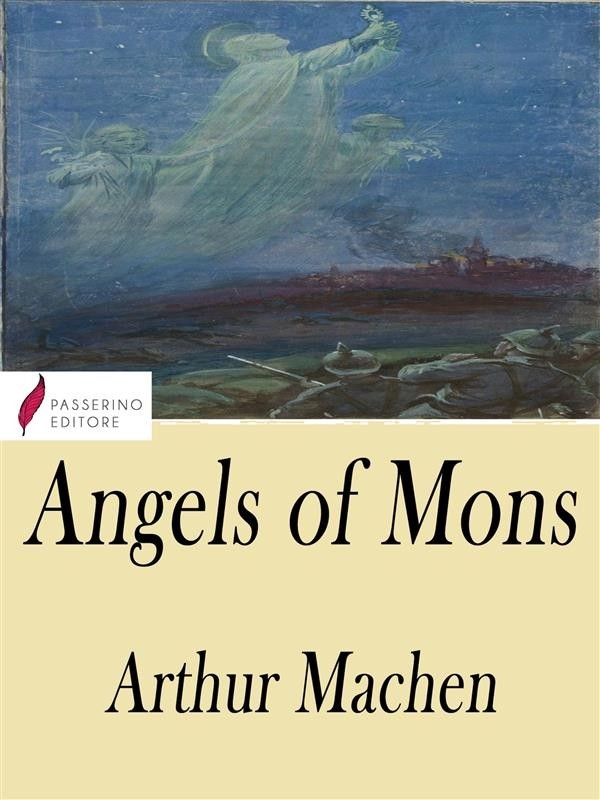 The Angels of Mons is a popular legend about a group of angels who supposedly protected members of the British Army in the Battle of Mons at the outset of the First World War.

On 29 September 1914 Welsh author Arthur Machen published a short story entitled "The Bowmen" in the London newspaper the Evening News, inspired by accounts that he had read of the fighting at Mons and an idea he had had soon after the battle.
Machen, who had already written a number of factual articles on the conflict for the paper, set his story at the time of the retreat from the Battle of Mons in August 1914. The story described phantom bowmen from the Battle of Agincourt summoned by a soldier calling on St. George, destroying a German host. Machen's story was not, however, labelled as fiction and the same edition of the Evening News ran a story by a different author under the heading "Our Short Story". Additionally, Machen's story was written from a first-hand perspective and was a kind of false document, a technique Machen knew well. The unintended result was that Machen had a number of requests to provide evidence for his sources for the story soon after its publication, from readers who thought it was true, to which he responded that it was completely imaginary, as he had no desire to create a hoax.
A month or two later Machen received requests from the editors of parish magazines to reprint the story, which were granted. In the introduction to The Bowmen and Other Legends of the War (1915) Machen relates that an unnamed priest, the editor of one of these magazines, subsequently wrote to him asking if he would allow the story to be reprinted in pamphlet form, and if he would write a short preface giving sources for the story. Machen replied that they were welcome to reprint but he could not give any sources for the story since he had none. The priest replied that Machen must be mistaken, that the "facts" of the story must be true, and that Machen had just elaborated on a true account. As Machen later said:
It seemed that my light fiction had been accepted by the congregation of this particular church as the solidest of facts; and it was then that it began to dawn on me that if I had failed in the art of letters, I had succeeded, unwittingly, in the art of deceit. This happened, I should think, some time in April, and the snowball of rumour that was then set rolling has been rolling ever since, growing bigger and bigger, till it is now swollen to a monstrous size.

— Arthur Machen, Introduction to The Bowmen and Other Legends of the War[
Around that time variations of the story began to appear, told as authentic histories, including an account that told how the corpses of German soldiers had been found on the battlefield with arrow wounds.

In "The Bowmen" Machen's soldier saw "a long line of shapes, with a shining about them." A Mr. A. P. Sinnett, writing in the Occult Review, stated that "those who could see said they saw 'a row of shining beings' between the two armies." This led Machen to suggest that the bowmen of his story had become the Angels of Mons. This last point was challenged by Harold Begbie in his book: On the Side of the Angels: A Reply to Arthur Machen, London 1915.

Arthur Machen (3 March 1863 – 15 December 1947) was the pen-name of Arthur Llewellyn Jones, a Welsh author and mystic of the 1890s and early 20th century. He is best known for his influential supernatural, fantasy, and horror fiction. His novella The Great God Pan (1890; 1894) has garnered a reputation as a classic of horror, with Stephen King describing it as "Maybe the best horror story in the English language." He is also well known for "The Bowmen", a short story that was widely read as fact, creating the legend of the Angels of Mons.