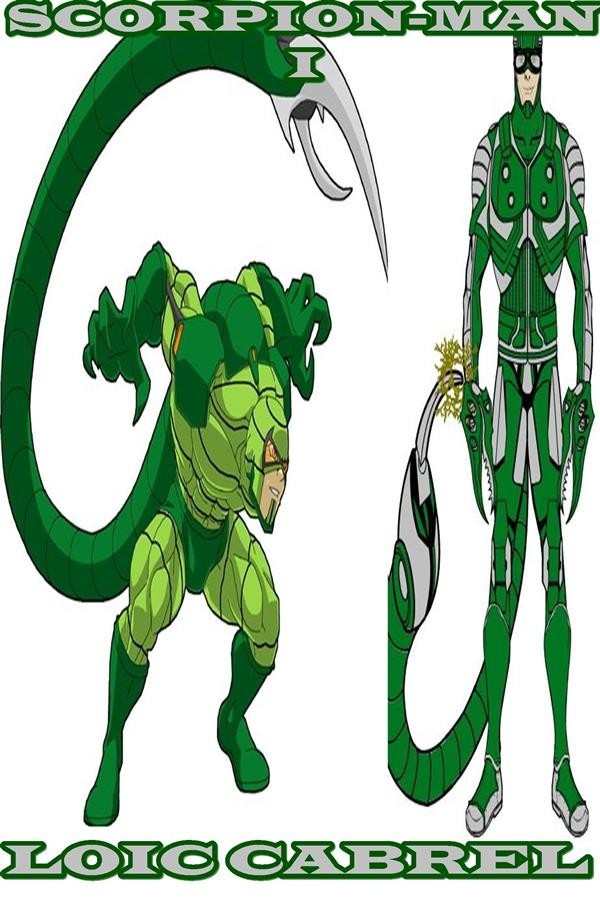 
Scorpion-man I, a 50,000-word and 180 page superhero novel, is the story of a human as a humanoid whose genes has been genetically changed as a created Scorpion-man, and who joins a group of good humanoids to fight off another group of evil humanoids who hate the humans they want to turn into humanoids.

Humanoids live in their humanoidland and humans live in their humanland on Earth. Humans are the superior and supreme race on this Earth, and the humanoids with super-powers, superheroic powers, supernatural powers and supra-powers are not happy about this. A gangly group of humanoids, the Fraternity, want the humanoids seen as superintendents and supervisors to the humans to command and control and subjugate them to subordinates and servants. Another group of humanoids, the Fantastic-men, contra and counter the Fraternity. The Fantastic-men are: Brian the Runnerboy, the group leader with long agile legs and armored battle gear in grey color, who’s an agile super runner running as fast as the speed of a missile – a runner running at super-speed. Ashley the Psionicgirl with her psionic powers, and Kimmy the Psychicgirl with her psychic powers, who are twin sisters, and all two dressed also in armored battle gear stripped of black-white-green-red-blue colors. The quintuplet sisters who each manipulate the five powers of the earth's five elements (thunderbolt, air, fire, earth and water) also called the Element Angels: Janet the Fulgura dressed in black gear who manipulates the Element Thunderbolt, Elizabeth the Aera with her vast, white, feathered wings and dressed in white armored gear who manipulates the Air Element, Mary Kate the Focus of the Fire Element with eyes hidden behind a visor with a horizontal ruby red slit across it and her hands flamed with fireballs, Alice the Terra dressed in green armored gear who manipulates the Earth Element, and Karen the Aqua dressed in blue armored gear who manipulates the Water Element. Also is Herrick the Invincibleboy who is of an invincible and invincibility and super-strength, Weslea the Invisiblegirl who is of an invisible and invisibility, and Caleb the Elastos or Elasticboy who is of an elastic and elasticity and super-stretch, and lastly to join is Michael the Scorpion-man. In this first book, the Fantastic-men and the Fraternity battle and brawl each other, as the former fights the latter from destroying the humans and humanity, and also the two fight for the fantastic and formidable Scorpion-man and his super scorpion-powers.