The Aqidah, Manhaj and Akhlaq of Ahlul Sunnah wal Jama'ah 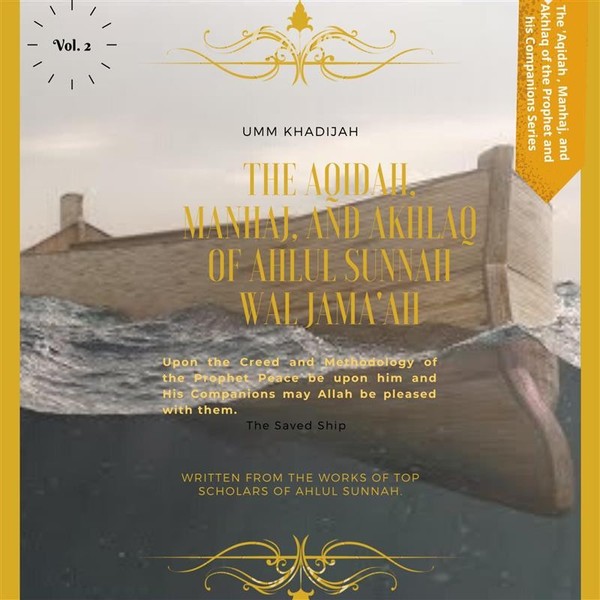 The Aqidah, Manhaj and Akhlaq of Ahlul Sunnah wal Jama'ah

The exciting and beneficial book "The Aqidah, Manhaj and Akhlaq of Ahlul Sunnah wa Jama'ah:Upon the Creed,Methodology,and Character of the Prophet Peace be upon him and His Companions may Allah be pleased with them,The Saved Ship.Volume 2" which is a summary and explanation of Kitab At-Tawheed along with other foundational concepts such as al-walaa wal baraa (alliance and dissociation),explains the creed and methodology of Ahlul Sunnah at a simple intermediate level with utilizing the original sources with evidence from the Quraan and authentic Hadith based on the understanding of the companions,the best early Muslim generation,and upon the creed, methodology and character of the Prophet and his companions.Ahlul Sunnah continue to utilize as evidence for their works and beliefs that which has been authentically reported from the Messenger of Allah. In addition to the author's contributions,who is a student of knowledge in her own right and aspires to be a leading scholar, this work includes the contributions of the world’s top, leading, well-reputed and prominent scholars such as the noble scholar Shaykh Muhammad bin Abdul Wahhaab,the Muhaddith Muḥammad Nasir al-Din al-Albani,Dr. Saalih Ibn Fawzaan al-Fawzaan,the noble Shaykh ‘Abdul-‘Aziz Ibn Baaz,the noble Shaykh Muhammad as-Salih al-‘Uthaymin,Shaykh-al-Islaam Taqiyy-ud-Din Ahmad ibn ‘Abdul Halim ibn ‘Abdus-Salaam ibn Taymiyyah,Imaam Shamsuddin Muhammad bin Abi Bakr Ibn Qayyim aj-Jawziyah,Shaykh 'Abdur-Rahman ibn Nasir ibn 'Abdullah as-Sa'di, Abū ‘Abd Allāh Muḥammad ibn Ismā‘īl ibn Ibrāhīm ibn al-Mughīrah ibn Bardizbah al-Ju‘fī al-Bukhārī and others.The scholars of the Sunnah continue, generation after generation, to call to following the Prophet peace be upon him and his companions, emulating them as an example, and traversing upon their path. Az-Zuhri said,"Those who passed of our predecessors used to say:'The adherence to the Sunnah is a rescue.'Allah says,"And when you have embarked on the ship,you and whoever is with you, then say: "All the praises and thanks be to Allah, Who has saved us from the people who are Dhalimun (i.e. oppressors, wrong-doers, polytheists, those who join others in worship with Allah, etc.) (Surah Al-Mu'minun, 23:28).Maalik (may Allah have mercy upon him) said that the Sunnah is like the ark of Nuh, whoever rides it will be rescued and whoever misses it will be drowned.Holding fast to As-Sunnah is a salvation.The Messenger of Allah peace be upon him when asked about the group that would be saved, said:The one that adheres to what I and my Companions adhere to.Shaykh Muhammad Nâsir ud-Dîn al-Albânî says “What I and my companions are adhering to” defines the path which the group that would be saved from the Fire must follow.They take its methodology from that of the Messenger of Allah peace be upon him and his companions.Correct Islamic creed helps one to attain both salvation from Allah's chastisement and happiness.The second volume provides an Islamic perspective on infectious diseases.This second volume requires the reader to have a basic understanding of the Arabic language because it is an intermediate level book.I hope that this work will be a good contribution in the field of da 'wah (calling) to Allah,Glorified be He and that it be taught to students first before studying other sciences of knowledge.The Muslim Creed textbooks to be taught in schools particularly to the youth and  should be selected from among books containing the creed which the Prophet and his companions are upon.It was narrated that Jundub bin 'Abdullah said:"We were with the Prophet (ﷺ), and we were strong youths, so we learned faith before we learned Qur'an.Then we learned Qur'an and our faith increased thereby."(Sunan Ibn Majah, Vol. 1, Book 1, Hadith 61)