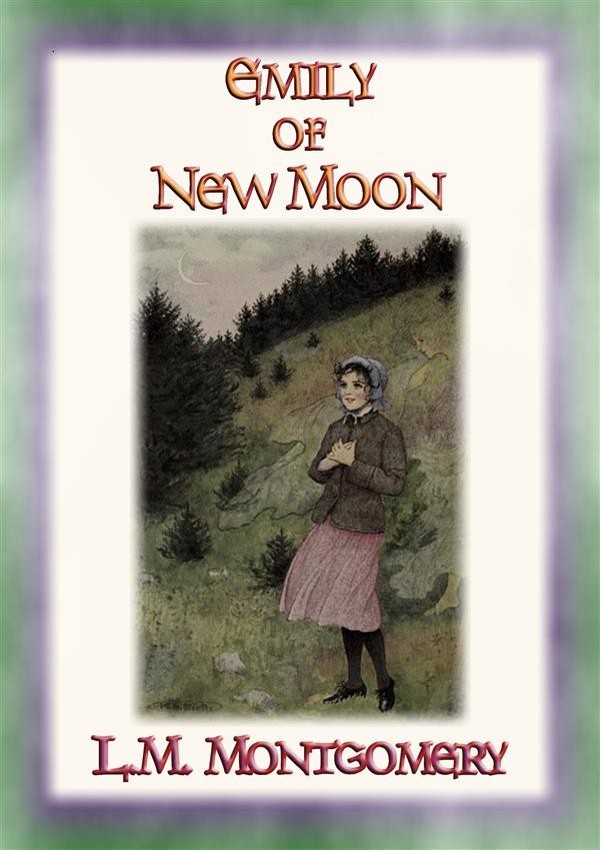 EMILY OF NEW MOON is the first in a series of novels by L. M. MONTGOMERY (1874 – 1942) about an orphan girl growing up on Prince Edward Island, Canada and is similar in genre to the author's “ANNE OF GREEN GABLES” series.

Similar to her earlier and more famous Anne of Green Gables series, the Emily novels depict life through the eyes of a young orphan girl, Emily Starr, who is raised by her relatives after her father dies of tuberculosis. Emily is described as having black hair, purply violet eyes, elfin ears, pale skin and a unique and enchanting "slow" smile.

Montgomery considered Emily to be a character much closer to her own personality than was Anne, and some of the events which occur in the Emily series actually happened to Montgomery herself.

SYNOPSIS: Emily Starr is sent to live at New Moon Farm on Prince Edward Island with her aunts Elizabeth and Laura Murray and her Cousin Jimmy. She makes friends with Ilse Burnley, Teddy Kent, and Perry Miller, the hired boy, whom Aunt Elizabeth looks down upon simply because he was born in 'Stovepipe Town', a poorer district.

Each of the children she makes friends with has a special gift. Emily was born to be a writer, Teddy is a gifted artist, Ilse is a talented elocutionist, and Perry has the makings of a great politician.

They each have a few problems with their families. Emily has a hard time getting along with Aunt Elizabeth, who does not understand her need to write. Ilse's father, Dr. Burnley, ignores Ilse most of the time because of a dreadful secret concerning Ilse's mother. Teddy's mother is jealous of her son's talents and friends, fearing that his love for them will eclipse his love for her; as a result, she hates Emily, Teddy's drawings, and even his pets. Perry is not as well off as the other three, so his Aunt Tom once tries to make Emily promise to marry Perry when they grow up, threatening that unless Emily does so, she will not pay for Perry's schooling.

Look out for the other unforgettable characters like Dean "Jarback" Priest; fiery Mr Carpenter, the crusty old schoolteacher who is Emily's mentor and honest poetry critic; "simple" Cousin Jimmy; Aunt Laura, who is the kind aunt; and strict, suspicious Aunt Elizabeth.