THE HONORABLE MISS MOONLIGHT - a Saga of the House of Saito 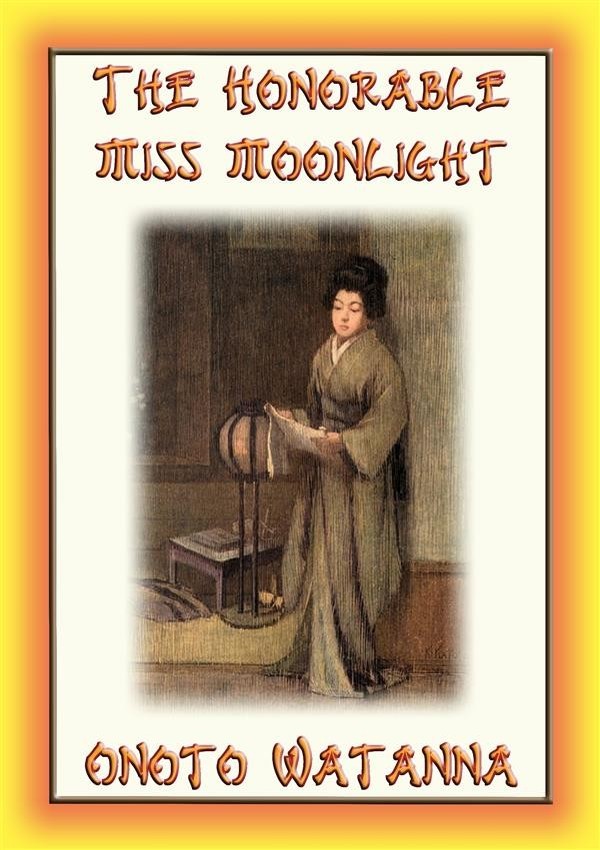 THE HONORABLE MISS MOONLIGHT - a Saga of the House of Saito

THE day had been long and sultry. It was the season of little heat, when an all-encompassing humidity seemed suspended over the land. Sky and earth were one a dim blue, which faded to shadowy grayness. With the approach of evening, a soothing breeze crept up from the river. Its faint movement brought a measure of relief, and nature took on a more animated aspect.

Up through the narrow, twisting roads, in and out of the never-ending paths, the lights of countless jinrikishas twinkled, bound for the Houses of Pleasure. Revelers called to each other out of the balmy darkness. Under the quivering light of a lifted lantern, suspended for an instant, faces gleamed out, then disappeared back into the darkness. To the young Lord Saito Gonji the night seemed to speak with myriad tongues. Like some finely tuned instrument whose slenderest string must vibrate if touched by a breath, so the heart of the youth was stirred by every appeal of the night.

He heard nothing of the chatter and laughter of those about him. For the time at least, he had put behind him that sickening, deadening thought that had borne him company now for so long. He was giving himself up entirely to the brief hour of joy, which had been agreeably extended to him in extenuation of the long life of thralldom yet to come. It was in his sole honor that the many relatives and connections of his family had assembled, joyously to celebrate the fleeting hours of youth. For within a week the Lord Saito Gonji was to marry. Upon this pale and dreamy youth the hopes of the illustrious house of Saito depended……

10% of the profit from the sale of this book will be donated to charities.
================
Winifred Eaton (1875-1954) was a Canadian author of Chinese-British ancestry who published under the Japanese-sounding pseudonym ONOTO WATANNA. Her English merchant father met her Chinese mother, the adopted daughter of English missionaries, on a business trip to Shanghai.
Eaton's first story was published in a Montreal paper when she was 14 and she soon had articles accepted by several popular magazines in the US. In her late teens she moved to Chicago, working as a typist whilst continuing to write, and soon had her work published in the Saturday Evening Post and other periodicals. She then turned to novel writing, capitalizing on her mixed ancestry to pass herself off as a Japanese American, and relocated to New York. She produced a number of bestsellers and later wrote screenplays for the burgeoning film industry.
================
KEYWORDS/TAGS: Honorable miss moonlight, ancestors, beautiful, body, child, city, draw, drew, eyes, family, geisha, geisha-house, girl, Gonji, honorable, House of Pleasure, house, husband, Ichigo, Japan, jinrikishasLady, last, Lord, love, lust, master, Matsuda, mistress, Moonlight, Ohano, Okusama, Omi, Pines, possible, pray, relatives, Reveler, rikshaw, Lord Saito, samurai, service, silence, Slender, Spider, sword, voice, wife, women, words, young, Onoto Watanna, Winifred Eaton, discipline,