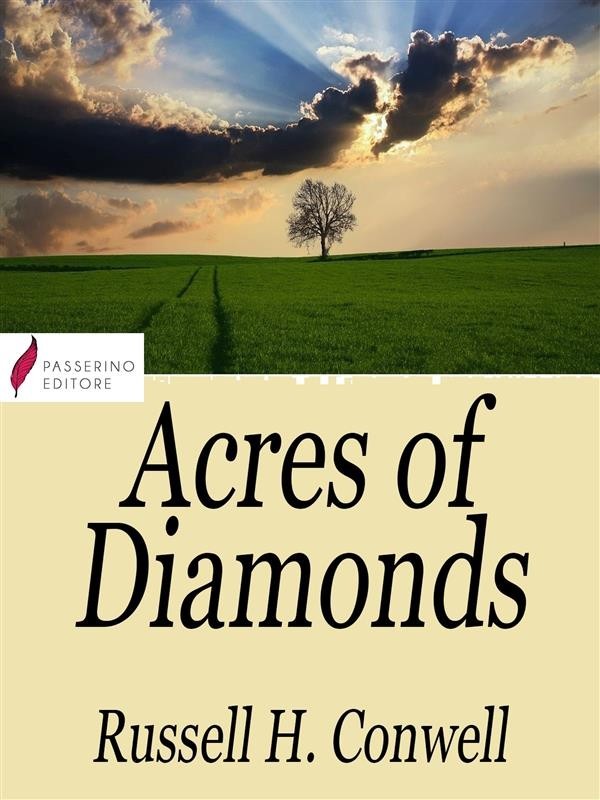 The original inspiration for "Acres of Diamonds" occurred in 1869 when Conwell was traveling in the Middle East.
The work began as a speech, "at first given," wrote Conwell in 1913, "before a reunion of my old comrades of the Forty-sixth Massachusetts Regiment, which served in the Civil War and in which I was captain."
It was delivered as a lecture on the Chautauqua circuit prior to his becoming pastor of the Grace Baptist Church in Philadelphia in 1882 and was first published in book form in 1890 by the John Y. Huber Company of Philadelphia.
Before his death in 1925, Conwell would deliver it over 6,152 times around the world.
The central idea of the work is that one need not look elsewhere for opportunity, achievement, or fortune; the resources to achieve all good things are present in one's own community. This theme is developed by an introductory anecdote, credited by Conwell to an Arab guide, about a man who wanted to find diamonds so badly that he sold his property and went off in futile search for them. The new owner of his home discovered that a rich diamond mine was located right there on the property. Conwell elaborates on the theme through examples of success, genius, service, or other virtues involving ordinary Americans contemporary to his audience: "dig in your own backyard!"

Russell Herman Conwell (February 15, 1843 – December 6, 1925) was an American Baptist minister, orator, philanthropist, lawyer, and writer. He is best remembered as the founder and first president of Temple University in Philadelphia, as the Pastor of The Baptist Temple, and for his inspirational lecture, "Acres of Diamonds". He was born in South Worthington, Massachusetts.