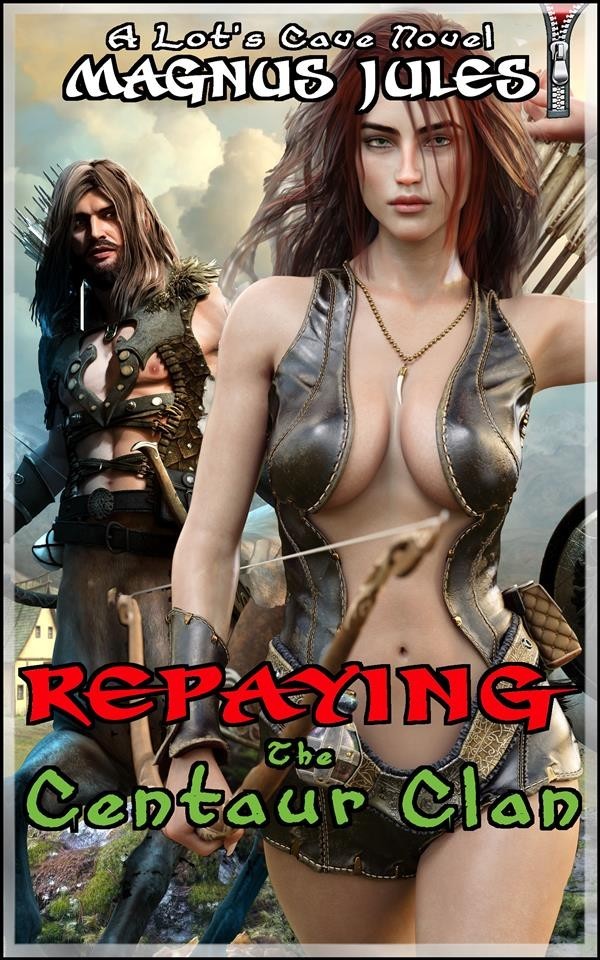 DESCRIPTION:
Orphaned nineteen year old Julie has had to provide for her two younger sisters ever since the three were left all alone with no family to protect them. But when young Julie decides to go out hunting to feed what’s left of her family, she ends up catching the wrong prey and she becomes the prey herself. And has to become the provider for someone else as payback!

EXCERPT:
He must be their leader, Julie thought as she looked over the centaur’s shining buckskin-colored coat and his thick, gleaming blond hair and tail. The hard outlines of muscle stood out clearly under his skin, and his pale, dove-grey hooves had been polished until they shone like marble. His narrow, dark green eyes were commanding and sharp and she felt suddenly like a small child again, being reprimanded for some stupid mistake or other. Except this time, I’ve killed someone.

“This human female was found with Jeremy’s body, with two of her arrows buried in his flesh. She is a trespasser and a murderer, and she has stolen one of our own from us.” Several of the centaurs stamped their hooves at this, lobbing curses at her and spitting in her direction. The chieftain paused to let them voice their anger, casting his oppressive green glare at her as she lay trembling before him. She wanted desperately to look away and cower, or run into the woods and escape their fury, but she knew that would only provoke more of their anger. So she stayed as still as she could, despite her terror, and kept her head up.

“She cannot repay me from the grave, Your Highness.” the female centaur said, jabbing her finger savagely at Julie. “My son, my only son, he cannot be replaced, but--” She paused to let out a sob, turning her face away from the circle of equines for a moment. “She is female, nonetheless, your highness.” she finished, turning to look at the chieftain.

The chieftain’s eyes flashed wickedly as he spoke in reply, his deep, rumbling voice ringing out over the crowd.“As payment for her crimes, this female here will not die. But nonetheless, she must replace what she stole from us.” Several centaur laughed or jeered as he said this, and Julie’s heart fluttered in her chest at his ominous words.

“Tie her up.” he commanded, stepping back as two centaurs came forth and hauled Julie off the ground from where she knelt before she could react. What is tying me here supposed to do? she thought wildly. She tried to turn her head to see where Laurel stood among the crowd around her, but found the female nowhere to be seen in the group that advanced or her, or any females for that matter. All of the centaur around her were completely male, from their hooves up. The realisation put a knot in her stomach, fear rising all over again. No!