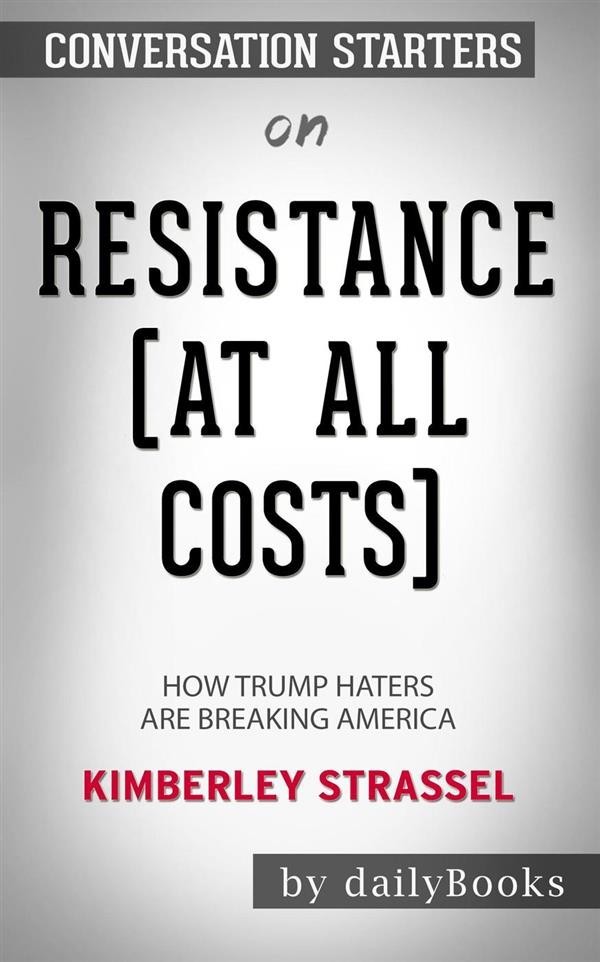 Resistance (At All Costs): How Trump Haters Are Breaking America is a novel that tells us how the public, precisely President Donald Trump's critics and opponents or haters, as Strassel wants to call them, is inflicting more long-term damage to America than the President himself. This novel mentions the investigations made by the FBI during the presidential campaign of Trump, the negative media portrayal on the President and the government, the opposition to the nomination of Brett Kavanaugh as an associate justice of the supreme court, termination of several executive orders given by the President, and others. The author argues that most Trump haters are doing so much damage just to sabotage the President and his decrees that they are disregarding norms, due process, and the rule of law. Wall-Street Journalist Kimberley Strassel, also the author of the New York Times bestseller The Intimidation Game: How the Left is Silencing Free Speech, released the novel 3 years after her debut solo novel. The novel currently has a high average rating of 4 over 5 on Goodreads and Amazon with over 400+ reviews. Like Strassel's previous book, her new book Resistance (At All Costs): How Trump Haters Are Breaking America became an instant New York Times bestseller.

These questions can be used to create hours of conversation:

• Foster a deeper understanding of the book
• Promote an atmosphere of discussion for groups
• Assist in the study of the book, either individually or corporately
• Explore unseen realms of the book as never seen before

Disclaimer: This book you are about to enjoy is an independent resource to supplement the original book, enhancing your experience. If you have not yet purchased a copy of the original book, please do before purchasing this unofficial Conversation Starters.

Download your copy now on sale
Read it on your PC, Mac, iOS or Android smartphone, tablet devices.