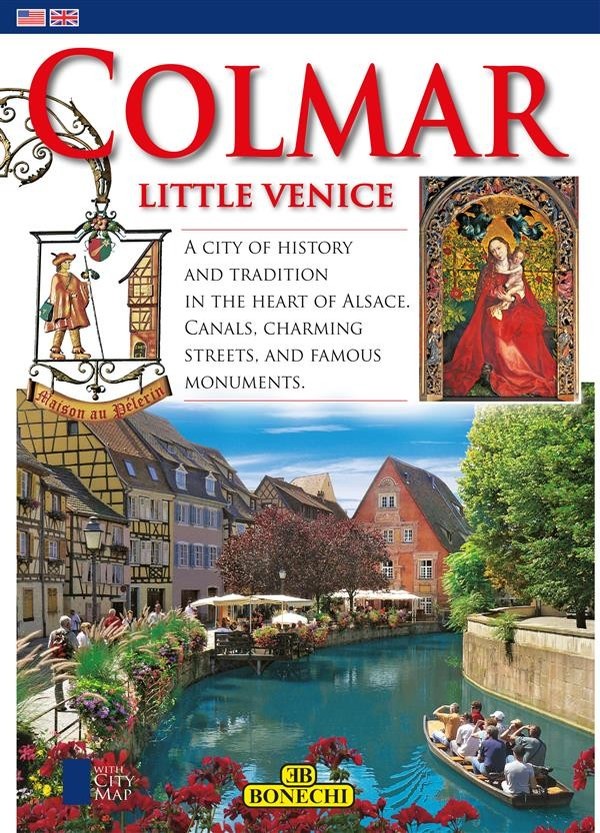 Situated in the Alsatian plain near the foothills of the Vosges, and more or less equidistant from Strasbourg and Basel, Colmar at the beginning of the 17th century appeared to be a town well integrated into a favourable site. To the West the lower slopes of the Vosges, covered in thick forests, still hide a number of the forts which were so numerous in the Middle Ages. To the East the rivers Ill and ̀ ur divide into a number of winding tributaries and the forests of the Ried unfold between these water-ways and the Rhine, beyond which, not far oﬀ , rise the hills of the Black Forest.Although archeological research has furnished abundant evidence for Man’s presence in the region since the Neo-lithic period, and the Bronze and Iron Ages have left behind some exceptional remains, Colmar does not make its appearance on the historical scene until much later. ̀ e impor-tant remains of the Gallo-Roman civilisation, to be found today in the Unterlinden Museum, pro-vide evidence for occupation of the countryside or at least of the Horburg site.It was in the 9th century that Colmar, known atthat time as Columbaria, was ﬁ rst mentioned in a document. ̀ e present town was then just a vast estate, a residence which was used on several occasions by the Carolingian Kings. It is between the 10th century (a period in which the Royal Estate was divided into two major parts, one going to the Chapter of Constance, the other to the Swiss Abbey of Payerne) and the begin-ning of the 13th that one can situate the ﬁ rst important period of growth of what was up to then only a large village... In fact the 13th century constitutes an essential stage of development in its history. Colmar was raised to the status of a municipality before coming directly under Imperial rule. ̀ is political development was accompanied by the ﬁ rst mention of the townsfolk, the new fortiﬁ cations, and the presence of the Impe-rial Eagle on the town’s seal. In 1278 Rodolphe of Hapsburg granted the town a municipal con-stitution whose statutes gave it a certain politi-cal autonomy: the area of competence of the provost and council were ﬁ xed, the towns-folk coming directly un-der the protection of the Empire. ̀ e end of the Middle Ages was marked by conﬂ icts through which thebourgeoisie con-ﬁ rmed its new power; there were struggles with the nobles whose role had been limited by the new constitution of 1360, there were struggles in the context of the great confrontations of the pe-riod, there was the struggle within the Decapole, that well known association of the ten imperial towns of Alsace.