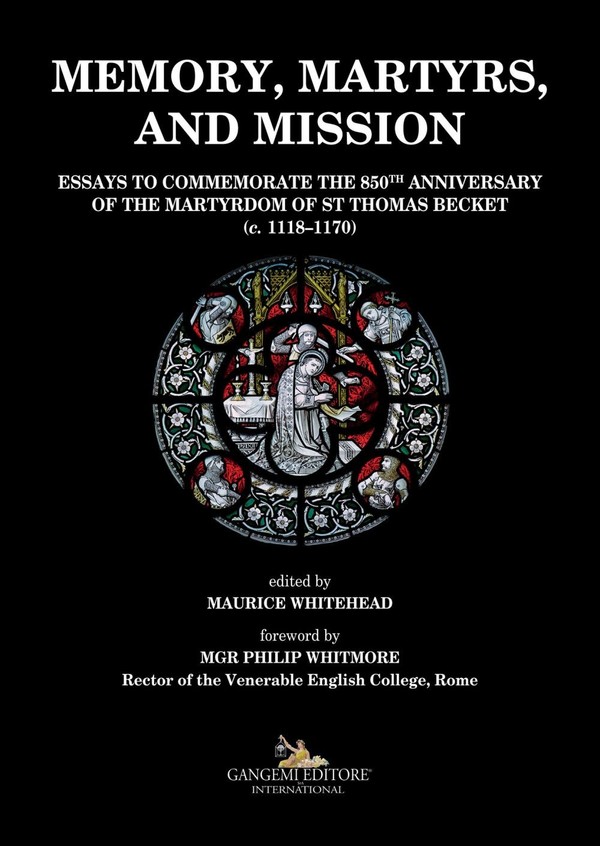 Essays to Commemorate the 850th Anniversary of the Martyrdom of St Thomas Becket (c. 1118-1170) | Foreword by Mgr Philip Whitmore Rector of the Venerable English College, Rome. Essays by Judith Champ, Peter Davidson, Eamon Duffy, Peter Leech, Peter Phillips, Carol M. Richardson, Nicholas Schofield. Edited by Maurice Whitehead | The murder on 29 December 1170 of Thomas Becket, Archbishop of Canterbury, sent shockwaves across the Christian world. The combination of his martyrdom, his canonization in 1173, and the creation of a shrine to him at Canterbury in 1220 increased the importance of the Via Francigena – the ancient pilgrim route from Canterbury to Rome: indeed the English Hospice, founded in Rome in 1362 for pilgrims from England and Wales, was dedicated to the Most Holy Trinity and St Thomas of Canterbury. The transformation in 1579 of the English Hospice into a new English College in Rome, preparing future priests to serve on the dangerous post-Reformation mission to England and Wales, engendered further martyrdoms: between 1581 and 1679, forty-four members of the Venerable English College, Rome, were executed for serving as priests on the mission to England and Wales. Exploring three major themes – Memory, Martyrs, and Mission – this volume analyses, on the 850th anniversary of his death, the enduring legacy of St Thomas of Canterbury, expressed in English seminaries in continental Europe through their distinctive spiritual, artistic and literary activities; the resilience of those institutions to radical change over the centuries, in the face of revolution, war and social upheaval; and the challenges and opportunities for the effective formation of priests ready to meet the changing demands of mission in the twenty-first century. The volume concludes by demonstrating how music associated with St Thomas of Canterbury has resonated across the centuries, from soon after his martyrdom down to the present day.