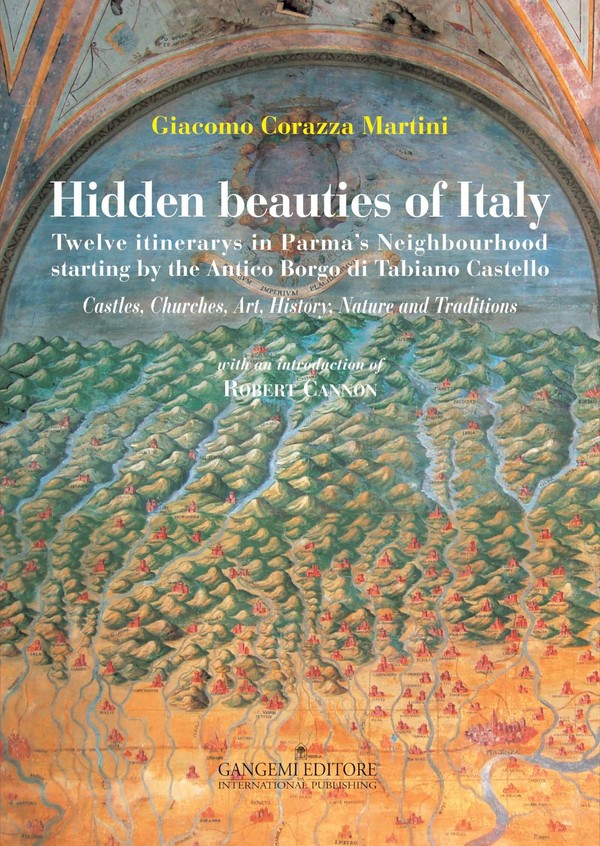 WHY THIS GUIDE I have written this guide for everyone who loves the history of art and the surroundings of Tabiano Castello, the land where I was born and raised. It is not meant to be comprehensive, but a personal choice, the fruit of memories of places that have stirred my emotions and which I have a strong desire to share: the castles, villages, churches and abbeys that fill this landscape from the Apennine and valleys to the plain and its great cities of Parma and Piacenza. I have devised 12 itineraries, each starting at Antico Borgo di Tabiano Castello. Some are longer than others and some of them have alternative routes and destinations. They can be followed in part or whole, starting at the end and finishing at the beginning. They can be followed by car or, with the nearer ones, by bicycle and even horseback. The book is an invitation for tourists and guests at Antico Borgo di Tabiano Castello, as well as those staying at Tabiano Bagni and Salsomaggiore Terme, to discover these treasures, both large and small, each set within its history and landscape. The 13th Century guard tower . GIACOMO CORAZZA, is an economist and farmer. His work combines personal experience of farming his own estates, with the understanding of the larger economic problems facing the agricultural sector. He has written numerous books and articles on the structure and methods of the agricultural business, the nature of the politico-agricultural community, and the liberalisation of international trade. He has published all by Gangemi Editore: “Tabiano Castello: the world of yesterday”, “The Castle of Tabiano: a thousand years of history, legend and mystery”, “Giacomo Corazza: the man and the building of Salsomaggiore at the end of the 19th century”. ROBERT CANNON is an academic specialising in the history of theatre and opera. His book The Cambridge Introduction to Opera came out in 2012. Currently he runs a series of seminars on Moral and Political Philosophy and The Aesthetics of Poetry. He has previously translated Euripides, Sophocles, Goldoni, Leopardi and Brecht. “I am ashamed to say that I found this extraordinarily rich area by accident. Ashamed, because my wife and I have been coming to Italy many years since 1972. In 2013 we had gone to Modena, but the art gallery was closed because of an earthquake. So – we went into Parma and had a marvellous time. We wanted also to supplement it with something local. In our hotel I found a small book which a third of it was devoted to the small towns and villages of the Province. It was a real eye-opener, and we decided to stay in the area and explore further the following year. After patient searching, we found the medieval Borgo of Tabiano. We booked. It was a paradise, itself a wonderful historic location. They also had a copy of this book, written by a member of the family that owns the borgo and its castle. This was an epiphany. The author reveald the less known history and artistic treasures of Parma’s surroundings castles, its small medieval churches (pievi) with sculptures and frescoes that they preserve in all their intensity, simplicity and harmony.” Robert Cannon, 2014