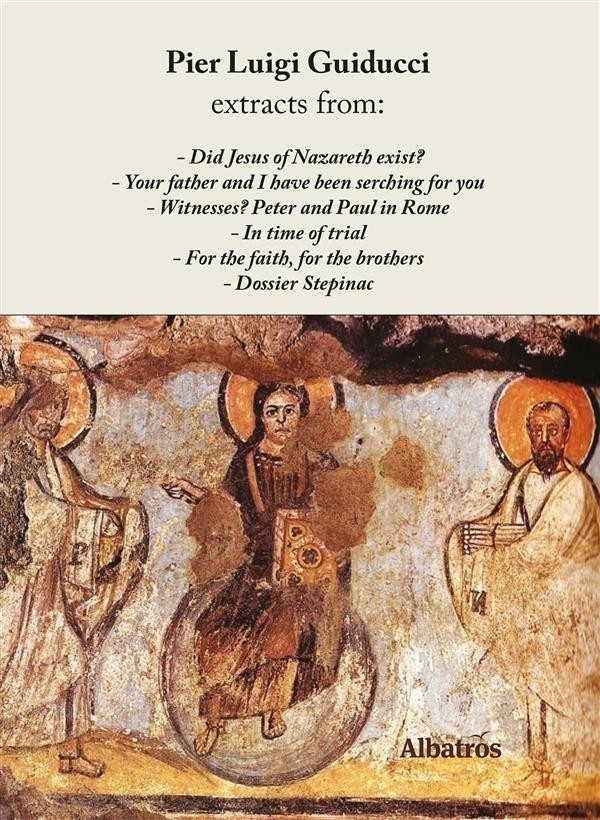 A prophet? A pacifist? A protester? A marginal Jew? Who was Jesus of Nazareth for his contemporaries? Above all, what did the non-Christians think about him? In order to answer these questions, one needs to take into account the historical sources and to analyse the books of the first Centuries. Moreover, it is useful to be familiar with archaeology. Such a background helps to better understand some contents of the Old Testament. With this book, Professor Pier Luigi Guiducci aims to provide the tools to find answers that are not linked to personal opinions but to real facts.

IN TIME OF TRIAL
Christian Martyrs’ Testimonies in Rome between the 1st and the 4th Century. (Preface by Peter Gumpel)

Christ’s followers, who faced martyrdom during the first centuries of Christianity, differed for age, social status, geographical area and education. They were not extraordinary people. They were not indifferent to pain and tragedies. Nevertheless, they did not repudiate their Faith. Among them, many kept proclaiming their being Cristian until death. The purpose of this book is to commemorate and to thank them gratefully. They taught us one thing, which is always topical: the true Faith does not lead to earthly triumphs, and it does not always walk comfortable and easy roads. It means, indeed, to follow the footprints of the only Master, even when the road leads to the Golgotha of our time.

Peter and Paul’s presence in Rome has a particular meaning. At the beginning of Christianity, they were witnesses, missionaries, masters, models of spiritual life and martyrs. They fulfilled the task they had been given by Jesus: to spread the Gospel among all nations. For that reason, they tried to spread it up to the centre of the Roman Empire, Rome. For their loyalty to Christ, for their firmness in difficult times and for their humanity, which they showed in many occasions, they remain two important and modern figures.

Your father and I have been searching for you…
The Holy Family of Nazareth. Three callings, three yeses to God. (Preface by Peter Gumpel)

Is it impossible to analyse their family? Were they too extraordinary to be understood? Are they too far from modern reality to teach anything to our society, or were they, on the contrary, pious people who patiently dedicated their lives to a long-term project, living happy hours, as well as harsh times? This book, based on historical analysis and supported by archaeological contributions, follows different research paths and highlights new and unexpected dynamics.

FOR THE FAITH, FOR THE BROTHERS
Meaningful Elements of Roman Church History between the 1st and the 4th Century. (Preface by Peter Gumpel)

This book provides useful and updated information about Roman Church history between the first and the fourth Century. The author of the book is a publishing expert and an historian. He outlines the coordinates of a reality that is not always easy to understand after so many centuries. From the origin of the missionary movement to the main features of the Roman Church, from the sacraments to the Empire-Church relationship, from the apologias to the cemeteries and the Peace of Constantine, the book describes both historic and everyday events, highlighting the role of faith and ecclesiastical life.

Disagreeable to Ante Pavelić’s Ustaše, Nazis, Fascists, Chetniks and Tito’s Communists, the Archbishop of Zagreb, Alojzije Viktor Stepinac (1898-1960) was neither a refined politician, nor a clever fixer. He did not use the tactics of a party strategist and he was not a hot-tempered, biased man. He worked to protect the Church from the events that devastated Croatia. Today, new documents highlight his fight against racism, his denouncement against crime, the safeguard of the oppressed, the humanitarian aid. He was sentenced to prison and house arrest for opposing the state attempt to subject Croatian Church to Tito’s Communism. He was created Cardinal, but he decided to remain in the place he had been shut in. He died before he could face a second trial.