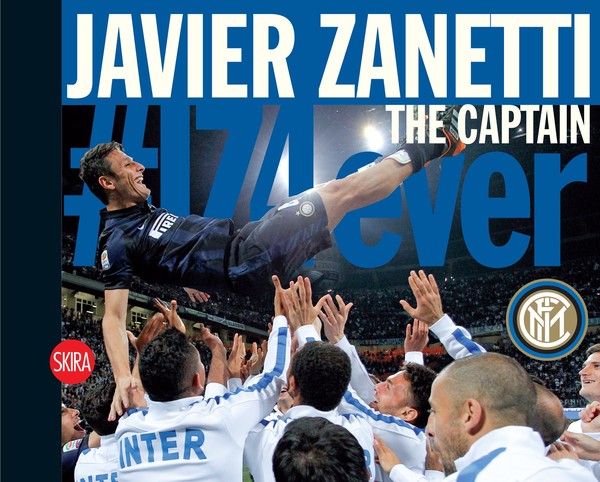 "Javier Zanetti. The Captain", the ebook celebrating Inter's icon. Available in three languages (Italian, English and Spanish), the book spans Zanetti's entire career as a Neroazzurro. Exclusive pictures from the Inter archive portray the Captain on the pitch as well as in his day-to-day activities. This is a must! It's all here, in an ebook based on 19 years of photographs from the Inter archives and the memories of the people who were there: this is how you become 'The captain - the one-and-only-captain'. Written in straightforward style, the book centres on Captain Javier Zanetti. The author, Susanna Wermelinger, has witnessed his arrival, training, growth and rise to fame with Inter, through good and bad, since 1995. After the success of the celebratory book Zanetti 757, record di fedeltà, which was sold out in less than two months in 2001, Inter and Skira are now presenting an updated and definitive version of the work in an electronic format, covering Javier's three last seasons as well as the unforgettable night when he bid his fans farewell at San Siro. A truly unique case, Javier Zanetti is a recordman for Inter attendances. He has certainly made it as a captain. He was only one among many other players when he first showed up at the Terrazza Martini – simply because of an intuition on Massimo Moratti's part – and we then saw him there, in Madrid, raising the Champions League trophy to the sky with tears of joy on his cheeks. Between these two moments, the relationship with Giacinto Facchetti, countless training sessions, the first Labrador he got on Roberto Baggio's suggestion, Paula (first girlfriend, then wife and mother of three children), those amazing team-mates – from Ronaldo to Eto’o – and his work with the Fondacion Pupi. The Captain's history coincides with that of Inter as the champion of Italy, Europe and the world – a team that made it through the shipwreck of Italian football unscathed. The ebook "Javier Zanetti. The Captain" is available in Italian, English and Spanish: an amazing journey offering some exclusive glimpses backstage as well as of Javier Zanetti's career as an Inter recordman and player for Argentina. Here is the account of the remarkable life of a man who held true to a dream – the Nerazzurri dream – for as long as he sported those colours; a dream made up of moments of private life, public appearances, and trophies raised to the sky. Integrity, hard work, diligence, and joy. "Javier Zanetti. The Captain" is a real must for anyone passionate about the history of Inter. As an illustrated work featuring many pictures in colour, the ebook Javier Zanetti, the Captain has been optimized for horizontal viewing on Tablets, PCs and Macs. It is available for iBooks, Kobo and Google Play, and through the Skira Editore app.