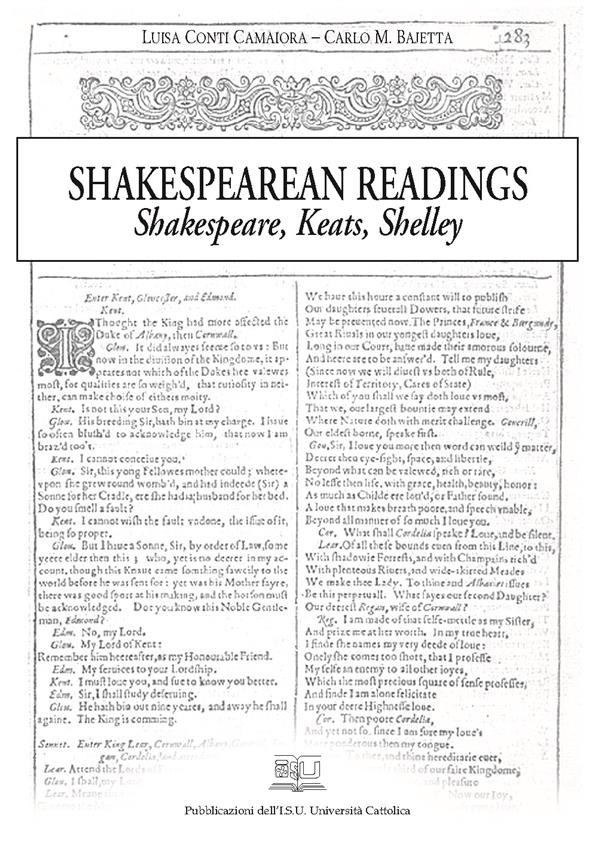 This volume contains a series of papers we delivered at the annual Shakespeare conference held at the Università Cattolica of Milan over three years. During this period our research interests ran on more or less parallel lines, moving from Shakespeare’s sonnets to the Bard’s influence on Keats and Shelley. If this was probably due to a similar way of interpreting the conference titles, it was just a coincidence that both of us devoted particular attention to King Lear. This play, we discovered, was particularly relevant to the work we were autonomously carrying out, Luisa Camaiora being then engaged in writing her book on Keats’s Odes, and Carlo Bajetta editing Shelley’s Peter Bell. As a consequence, we started mentioning articles, discussed recent research, and there was much swapping of books – which created more than a little confusion in our bookshelves, and much irritation in some University librarians. When we looked back at these essays, we were surprised to note that a fil rouge seemed to run through them. From the ambiguities of one of Shakespeare’s most famous sonnets, number 116, they move on to describe the allusive structure of the sonnet-chorus of Romeo and Juliet, hence to the complexities of the initial scene of King Lear and the uses to which this play was put by Keats and Shelley; they eventually come back to Keats’s relationship with the works of the Bard, and finally to yet another sonnet, which constitutes in many ways an original re-reading of Shakespeare. ‘Shakespearean Readings’, alluding to both textual variants, critical analysis, and a writer’s understanding of a literary work, seems to be a fitting title to describe this red thread. ‘'Passage' and 'Traffic' in Romeo and Juliet’ and ‘Textual Madness: King Lear’s peregrinations’ were first published in To go or not to go? Catching the moving Shakespeare (ed. L. Camaiora, Milan, I.S.U. Università Cattolica, 2004), ‘John Keats and his Presider Shakespeare’ and ‘Shakespeare’s Sonnet 12 and Keats’s “When I have fears”’ appeared in a different form in L’Analisi Linguistica e Letteraria, 7:1, 1999, while ‘Shelley’s Shakespearean Mockery of Wordsworth’, which was read at the Shakespeare Days conference in April 2003, both relies on and integrates some sections of the introduction to Peter Bell: the 1819 Texts which appeared in December of the same year (Mursia, Milan). Milan, June 2004 Luisa Conti Camaiora – Carlo M. Bajetta Dalla Prfazione degli Autori