The City of Dreadful Night 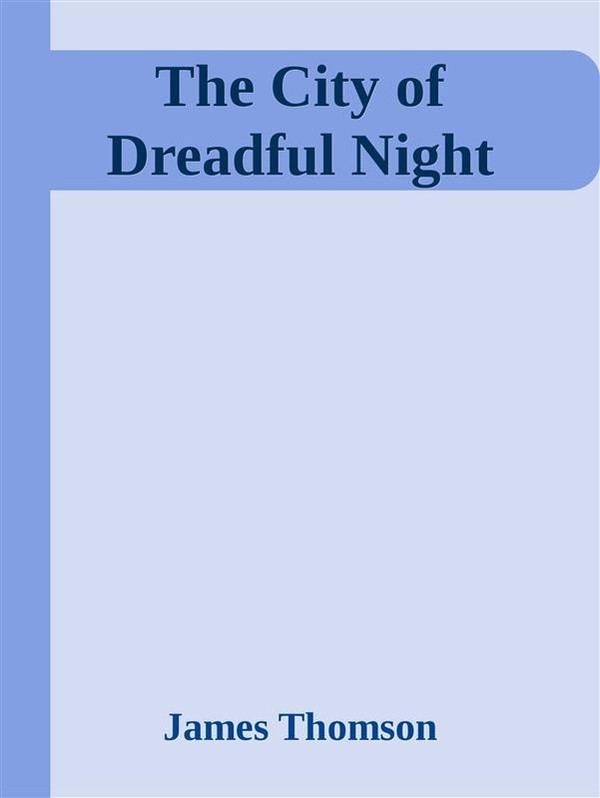 The City of Dreadful Night

James Thomson was a Scottish poet and playwright, known for his masterpiece The Seasons and the lyrics of "Rule, Britannia!". James Thomson was born in Ednam in Roxburghshire around 11 September 1700 and baptised on 15 September. He was the fourth of nine children of Thomas Thomson and Beatrix Thomson (née Trotter). Beatrix Thomson was born in Fogo, Berwickshire and was a distant relation of the house of Hume. Thomas Thomson was the Presbyterian minister of Ednam until eight weeks after Thomson’s birth, when he was admitted as minister of Southdean, where Thomson spent most of his early years. Thomson may have attended the parish school of Southdean before going to the grammar school in Jedburgh in 1712. He failed to distinguish himself there. Shiels, his earliest biographer, writes: 'far from appearing to possess a sprightly genius, [Thomson] was considered by his schoolmaster, and those which directed his education, as being really without a common share of parts'. He was, however, encouraged to write poetry by Robert Riccaltoun (1691–1769), a farmer, poet and Presbyterian minister; and Sir William Bennet (d. 1729), a whig laird who was a patron of Allan Ramsay.While some early poems by Thomson survive, he burned most of them on New Year’s Day each year. Thomson entered the College of Edinburgh in autumn 1715, destined for the Presbyterian ministry. At Edinburgh he studied metaphysics, Logic, Ethics, Greek, Latin and Natural Philosophy. He completed his arts course in 1719 but chose not to graduate, instead entering Divinity Hall to become a minister.[6] In 1716 Thomas Thomson died, with local legend saying that he was killed whilst performing an exorcism. At Edinburgh Thomson became a member of the Grotesque Club, a literary group, and he met his lifelong friend David Mallet. After the successful publication of some of his poems in the ‘’Edinburgh Miscellany’’ Thomson followed Mallet to London in February 1725 in an effort to publish his verse (font: Wikipedia)