That Politics may be reduced to a Science 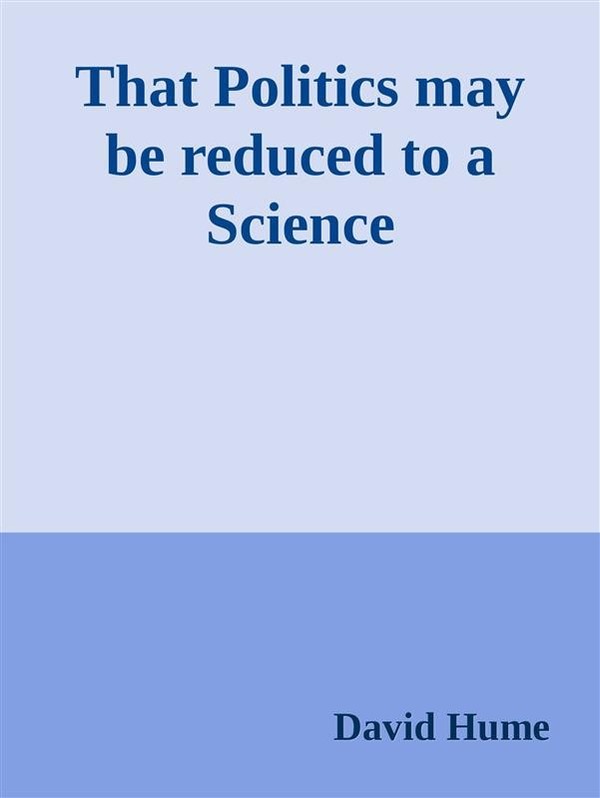 That Politics may be reduced to a Science

Philosopher and historian, second son of Joseph Hume, of Ninewells, Berwickshire, was born and educated in Edinburgh, and was intended for the law. For this, however, he had no aptitude, and commercial pursuits into which he was initiated in a counting-house in Bristol proving equally uncongenial, he was permitted to follow out his literary bent, and in 1734 went to France, where he passed three years at Rheims and La Flèche in study, living on a small allowance made him by his father. In 1739 he published anonymously his Treatise on Human Nature, which attracted little attention. Having returned to Scotland, he wrote at Ninewells his Essays, Moral and Philosophical (1741–42). He now became desirous of finding some employment which would put him in a position of independence, and having been unsuccessful in his candidature for the Chair of Moral Philosophy in Edinburgh, he became in 1745 governor to the Marquis of Annandale, a nobleman whose state was little removed from insanity. Two years later he accepted the more congenial appointment of Judge–Advocate-General to General St. Clair on his expedition to Port L’Orient, and in 1748 accompanied him on a diplomatic mission to France, whence he passed on to Vienna and Turin. About the same time he produced his Philosophical Essays [1748], including the famous Essay in Miracles which gave rise to so much controversy. These were followed in 1751 by his Enquiry into the Principles of Morals, which he considered his best work; and in 1752 by his Political Discourses, which alone of his works had an immediate success. In the same year he applied unsuccessfully for the Chair of Logic in Glasgow, but was appointed Keeper of the Advocates’ Library in Edinburgh. The access to books and original authorities which this position gave him appears to have suggested to his mind the idea of writing a history, and the first vol. of his History of England, containing the reigns of James I. and Charles I., was published in 1754. Its reception was not favourable, and the disappointment of the author was so great that, had it not been for the state of war between the two countries, he would have left his native land, changed his name, and settled permanently in France. The second vol., which appeared in 1757, dealing with the Commonwealth, and the reigns of Charles II. and James II., had a better reception, and had the effect of “buoying up its unfortunate brother.” Thereafter the tide completely turned, and the remaining four vols., 1759 and 1762, in which he turned back and finished the history from the invasion of Julius Cæsar to the accession of Henry VII., attained a vast popularity, which extended to the whole work. Hume published in 1757 Four Dissertations: the Natural History of Religion; of the Passions; of Tragedy; of the Standard of Taste. Two others on Suicide and on The Immortality of the Soul were cancelled, but published posthumously.