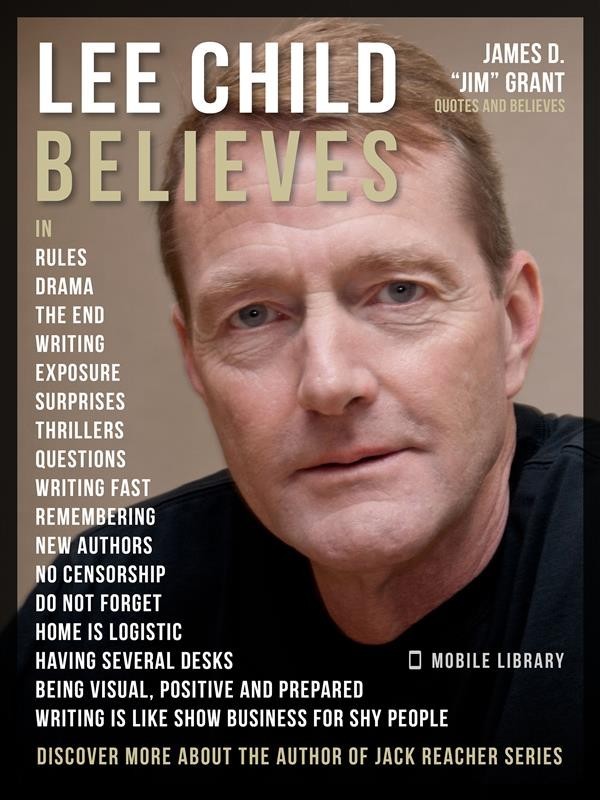 
With a writing career that started almost by "accident" (after loosing his job because of a corporate restructuring), James D. "Jim" Grant become famous under his pen name "Lee Child".

The author of the series Jack Reacher novels by Lee Child was born in Coventry, England, on 29 October 1954.

He spent his first years in the nearby city of Birmingham and went to law school in Sheffield, England.

After a part-time work in the theater, he joined Granada Television in Manchester where he worked for 18 years, but he was fired from there in 1995, when he was 40 years old, because of a corporate restructuring.

But from bad things come good things and creted the ocasion to start writing and in 1997, Lee Child first book, "Killing Floor", was published.
That book was an immediate success and the beginning of a series that has grown in popularity with every new book and on the next year Lee Child moved to the US where he kept working on more and more adventures.

And this year they will have another gift: Lee Child 2018 release has already been announced and the title is already know: "Past Tense" will be the name of Lee Child latest book, coming out this Autumn.

This will be the next and 23rd Jack Reacher novel - and Past Tense book is estimated to go on sale in November 2018 in US, Canada, UK, Ireland, Australia and New Zealand.

For those who love the Lee Child series we made this eBook as a way to know better the mind of write behind the Jack Reacher novels.

We collected in this eBook a very interesting number of Lee Child's quotes to help you understand better the mind of this amazing writer.

Lee Child personal quotes will help you to understand his vision of the world and what lead to Jack Reacher novels...