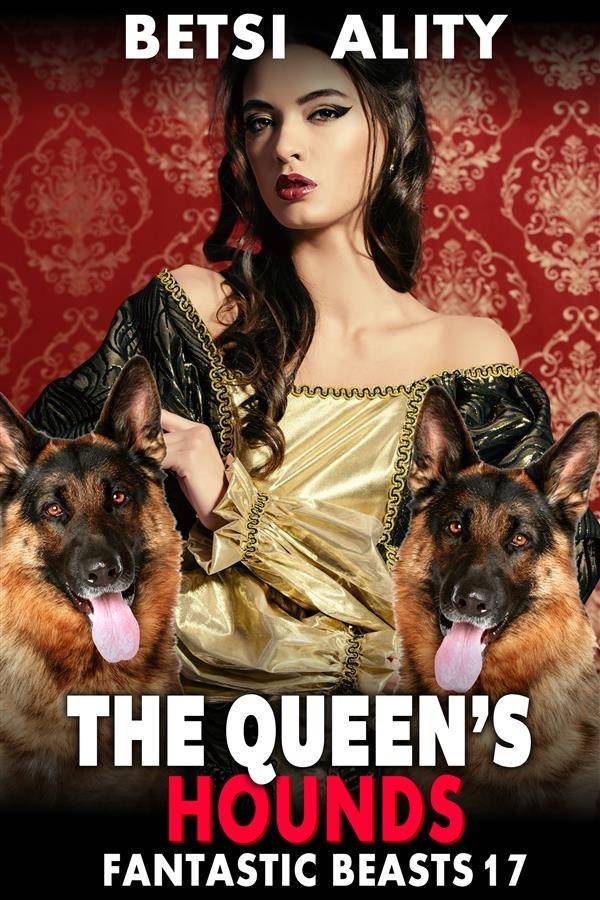 My canine companions were part of a long lineage of beasts that grew up alongside our royal family.  My two huge mutts—Tiberius and Zeus—were effectively royal protectors, staying at my side during everything.  And I mean everything.
But life can be lonely for the Queen of a kingdom and I have to get my fun from somewhere.  Read how I get double-stuffed by my dogs, with one in my ass and one in my pussy at the same time.
Dog save the Queen!

Read An Excerpt
My hands worked their way down to the stomachs of the beasts now and fingered delicately along the vast lengths of their cocks.
As I approached the furry tip of each they started to unfurl slowly, rolling back and revealing the blood-red lipstick of skin beneath.
“Good boys,” I said softly, pushing down each of them in turn.
Theirs cock sprang out of the sheathing with ease, flailing up on the chest like some kind of tentacles beasts.  Each of them began to pant.
I gripped a cock in each fist and clenched them tight, feeling a power like no other.  Slowly I started to bring my hand back and forth over them until they were swollen and primed.  Their cocks looked deliciously erect and they were having quite the effect on me.
“Good boys,” I said, rowing back and forth along their sinful lengths.
I wasn’t exactly sure yet of my plans but I knew they involved being speared by the beasts.  I just had no idea exactly how sinful I could get.
“Stay,” I said, and I moved my hands to my panties and started to slide them down over my tights.
I rocked back and pulled them down over my ass, sliding them over the silky tights until they fell off my ankles.  My legs opened wide and I felt the flames warm me.
My fingers slipped down to the loose flesh and I teased a finger inside, finding my wetness and letting it break over my finger.  I splayed the ensuing juices up my folds until they were glistening wet, then I fell to one side and laid my head on Zeus’s chest.
“Good boy,” I said again, and I started to inch my way down towards his stomach.  In my eye-line I could see the deep red of his forbidden appendage and it was drawing ever-closer to my lips.
I tried not to think about it too much as I continued downwards and soon I was close enough so that I could stretch out a tongue and touch it.
I did just that and felt Zeus flinch beneath me, but he showed no signs of moving away.  Instead he let out a long sigh and I took it that he meant for me to continue.