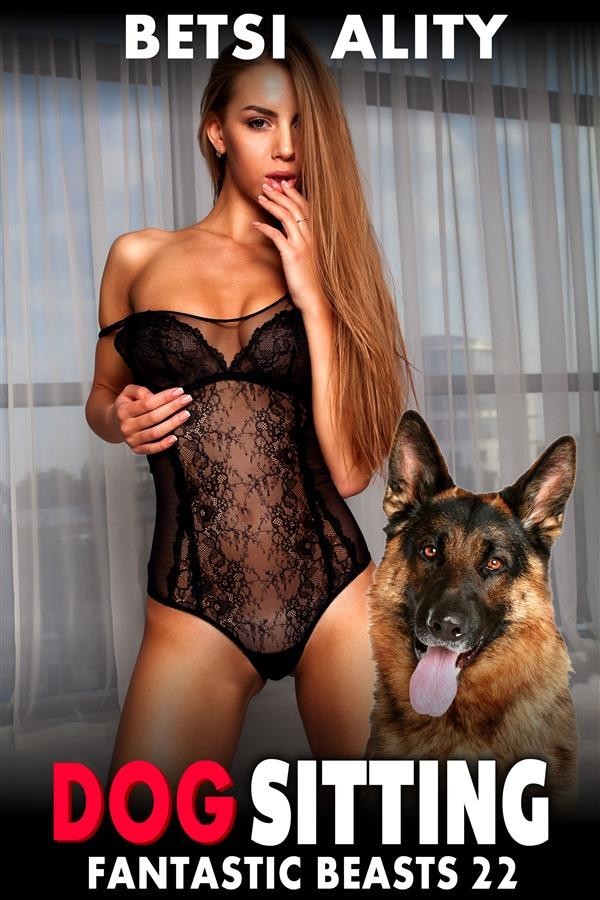 Just one night of doggy-sitting would net me a cool two-hundred bucks, but I had no idea what was in store.  The owner seems to be hiding something as he leaves me alone with his big pooch Artemis, and I soon find out why.  The doggy is insatiable, but he’s finally met his match.  I’m insatiable too!  Read how we both satisfy each other.

Read An Excerpt
His tail started to wag again as he became excited, jumping up on my back and making a host of impatient whoops and barks.
“You are a feisty one,” I teased, throwing him off me and squaring up to him with a smile.
He gave a sharp bark and dipped his front legs, bobbing this way and that before pouncing at me again.
I giggled as he mounted me, but then I felt his body start to shake in strange convulsions.
“Hey!” I shouted, realizing quickly what was happening.
I wriggled back and that’s when I saw it hanging under him.  It was big and red, peeling out from his hairy sheath and looking enormous.
“What’s that you’ve got there?” I said, monotone and mesmerized.
I ogled it like it was something I’d never seen before, studying each ridge and sinew and starting to think sinful thoughts.
“You can’t,” I whispered to myself.  It wasn’t the first time I’d had to quash my desires.
Artemis wagged his tail and came cautiously over, letting out a few licks of his tongue that struck my face.
I giggle nervously, knowing that I was being consumed by those same sinful, naughty thoughts that had plagued me all these years.  You see, I’d long since had an urge to do something totally taboo with man’s best friend, but I’d never acted on it.
It wasn’t my first time dog-sitting.  Mostly I did it to test my resolve, but I’d never met a dog quite like Artemis before.  He was handsome—sexy even—in a way I’d never thought possible.  He gave me another tender lick and I started to melt for him.
“Don’t make me do this,” I whined, rubbing my face against his and holding him to me as I moaned.
He gave me another lick and I reached beneath him, drawn like a tractor-beam towards that canine cock of his.  I gripped it in a fist and sucked a breath through my teeth.
“That’s what I want,” I groaned, feeling my pussy swell with juices.