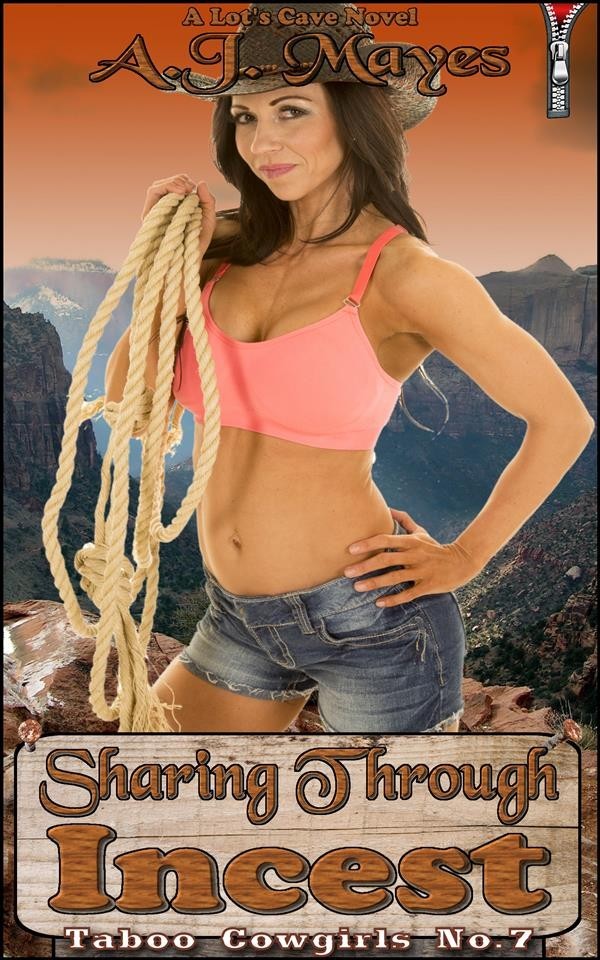 DESCRIPTION:
Finding romance on a ranch should be easy. Four couples (2 families) are hoping for love and marriage. Sounds easy. Right? But what if no one wants to give up their other lovers? Incest means sharing, so let’s make it work.

EXCERPT:
Colbie walked up the steps into the house and smiled when she saw Britt rushing to the door. Britt grabbed Luke. “C’mon, stud. This filly needs your big dick. Now.”

Watching as Britt tugged him towards a bedroom, Colbie called out, “Don’t kill Luke, cutie. All us girls want him.”

On a mission, Colbie walked to the kitchen, and seeing Finn, moved to him. Finn grinned. “Looking for me, hot momma?”

“Yep. C’mon, stud for hire. I’m paying top dollar. Do me like you did yesterday.”

After the sex with Finn, Colbie tied a microscopic bikini on, grabbed a pitcher of lemonade from the kitchen, and joined the other women by the pool. Lori smiled as Colbie handed her a glass. “Thanks, gorgeous. Have fun with Luke and Finn?”

“Who wouldn’t with studs like them?” Colbie handed Parker and Britt glasses, settled on a lounge and touched Lori’s arm. “I talked with Luke.”

“He’s ready to let a woman into his life.”

“Colbie, I’m in love with Houston. And I think he feels the same,” Britt said.

“Perfect. That’s what I want, cutie.” Colbie looked at Parker. “What about you and Finn?”

“I want him. I’ll have that hunk wrapped up in a day or two. Promise. Shit. I mean if that’s okay with you, Lori.”

“Wrap my son up.” Lori raised her glass. “To the slut club, girls. May our men survive.”

With the sounds of four glasses clinking together, the bond was sealed.

Colbie saw Luke and Reece walking towards them. “Shh, girls. We don’t want the men knowing we formed a club.” She grinned when the men reached them. “I thought you boys would be hiding from us.”

“We are. Houston took Finn to the river to fish and drink beer. Reece and I are going down in a minute. But first, we wanted to lay down the law for you ladies.”

“Ooh. I like it when men act like they’re the boss.” Colbie looked at Reece. “Please. Tell us, handsome. Or should I call you, Sheriff?”

“Right now, Luke and I are Sheriffs.” Reece glared down at her. “We love the sex, darlin’, but Jesus, we’re human. Luke and I aren’t twenty-one, like Houston and Finn. With pills, we figure we can go five or six times a day. That’s all you sluts get. Period.”

“And we already shot four bullets today. Do the math,” Luke said.

“Okay. We’ll agree to that if we can have Zeke, brother.”