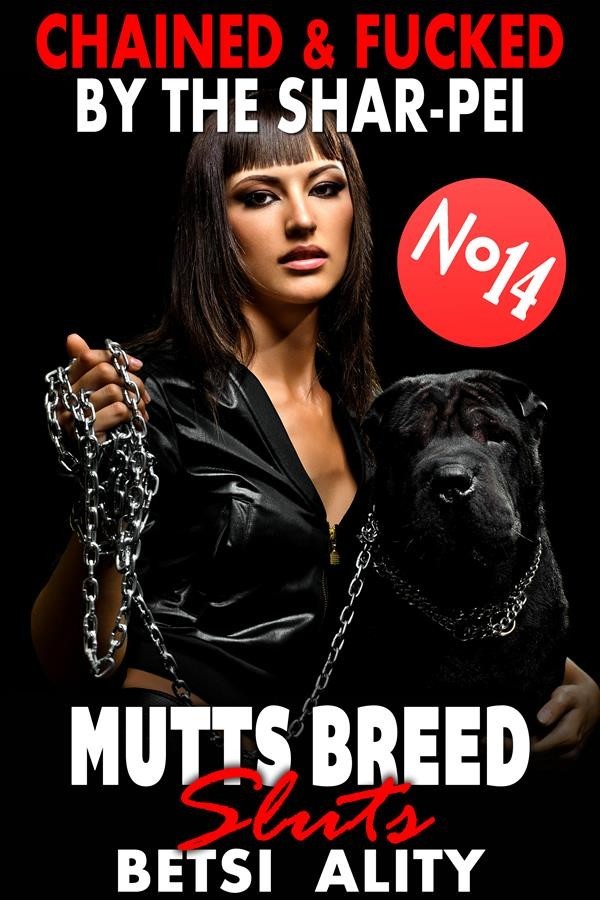 When I hear a distant whining from an alleyway I’m passing I just have to investigate, but as I venture further in I realize I’ve been lured into a trap!  The Shar-Pei seems menacing at first, but its intent is nothing more than to deliver its hot dog spunk in satisfying fashion while its mysterious owner watches it all on camera from a distant room.
Read how he chains me up and I get on all-fours for him, taking everything he has to offer.

Read An Excerpt
“What the fuck is this?” I cried.
“Harley,” the voice said, calm and clear.  “Rip panties.”
My eyes bulged in shock.  I looked back as the Shar-Pei jumped off my back and stared at my round ass.
“No, Harley,” I said, becoming more terrified as his mouth approached.  “Don’t you do it.”
He pinched the fabric of my crotch between his teeth and then pulled back.
“Stop it, Harley!” I cried, looking up to the camera pleadingly.  “Make him stop!”
“Good boy, Harley,” came the voice, and along with it came the tearing of my pants.
They ripped open and I felt the cool air of the room on my exposed skin.  Harley let the tattered fabric drop from his mouth and his ears pricked when his owner’s voice returned.
“Harley.  Lick pussy,” it said, and the camera moved again.
My mouth dropped open in shock, but before I could protest I felt the swashing of Harley’s tongue racing over my revealed flesh.  He must have taken the crotch of my panties with him, because it felt like there was nothing covering my pussy now.
“Harley!” I wailed, but I found my cries tinged with pleasure.
“Good boy,” the voice said steadily, and the mutt continued to slip his big, wet tongue over my pussy in a fashion that I have to confess I found delightful.
“Surrender to it,” the voice said.  “It feels good, doesn’t it?”
“Yes!” I whined.  “No!  Stop it!  Let me out!”
I knelt upright but the dog continued to lap at my ass, pushing his big tongue through the tear and getting everything he could from me.
I fell forwards, my mind a mix of tormented anguish and shameful pleasure.  The dog’s tongue felt incredible—more so than any man I’d ever had—but the taboo nature of it all frightened me.
“It’s okay,” the voice said calmly.  “Enjoy it.”