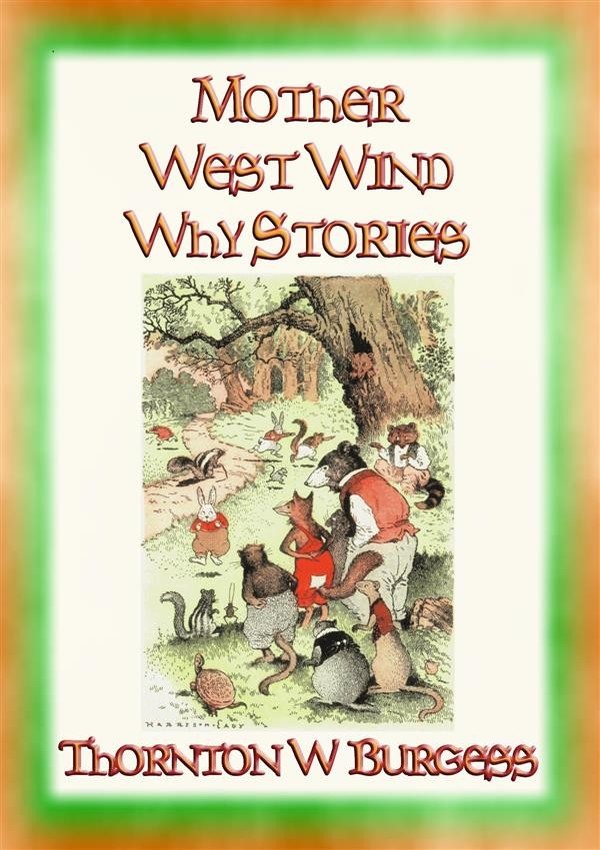 Thornton W. Burgess was a bird-watching, berry-picking student of nature, who took up writing children's stores including those collected in Old Mother West Wind "Why" Stories which were published in 1920.

Grandfather Frog is very old and very wise, and he knows all about the days when the world was young. When he is feeling just right, he dearly loves to tell about those long-ago days. "Chug-a-rum!" says Grandfather Frog. And then he told why Peter Rabbit -- and all rabbits -- cannot bend their wrists. In fact, he told a thousand stories, because that's what Grandfather Frog was meant to do. Stories of Rabbits, Chipmunks, Possums, Foxes and more forest animals. Grandfather Frog knows the important stuff about everybody who lives around the meadow.

Burgess sets his tales at a time "when the world was young," back when Peter Rabbit's "great-great-ever-so-great grandfather" was a young hopper, and Old Mother Nature still had some work to do on basic designs. She sees that a duck needs webbed feet to swim, and a prairie dog needs a burrow designed to keep dry. Burgess's animals are proud of their unique features and abilities, but the real voice of enthusiasm is the author's own, sharing the delights he found in the woods of New England. Typical of the book's charm is the story of where "Dippy the loon got the name of being crazy." The bird is smarter than he looks -- and that's how Dippy always gets the last laugh.

10% of the profit from the sale of the book will be donated to charities.
===================================
Thornton W. (Waldo) Burgess (1874-1965), American author, naturalist and conservationist, wrote popular children's stories including the Old Mother West Wind series (1910). He would go on to write more than 100 books and thousands of short-stories during his lifetime.
Thornton Burgess loved the beauty of nature and its living creatures so much that he wrote about them for 50 years in books and his newspaper column, "Bedtime Stories". He was sometimes known as the Bedtime Story-Man. By the time he retired, he had written more than 170 books and 15,000 stories for the daily newspaper column.
===================================
KEYWORDS/TAGS: Mother West Wind, why stories, childrens stories, fables, folklore, animal stories, forest stories, children’s book, Striped Chipmunk, Stripes, Peter Rabbit, rabbit Hands, Unc' Billy Possum, Play Dead, Reddy Fox, Red clothes, Jimmy Skunk, Never Hurries, Sammy Jay, Fine Coat, Jerry Muskrat, House In The Water, Old Man Coyote, Miner The Mole, Live Under Ground, Mr. Snake, Cannot Wink, Bobby Coon, Rings On His Tail, Black Head, Buzzard Family, Buster Bear, Appears To Have No Tail, Flitter The Bat, Flies At Night, Spotty The Turtle, Carries His House, Paddy The Beaver, Broad Tail, Forest Feast, Grandfather Frog, stick out his Tongue, Old King Bear, Wish, Wish to fly, thornton W Burgess,