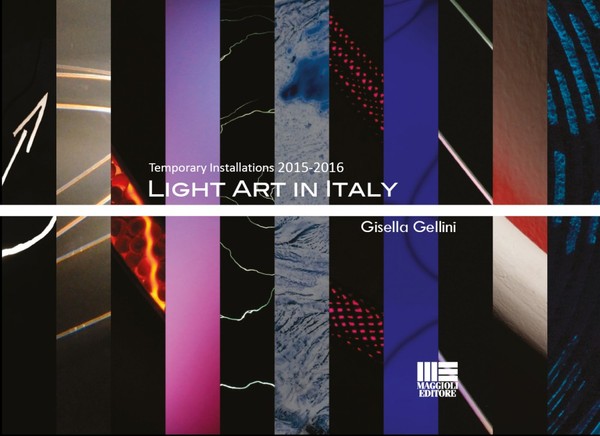 Light as project for life The eighth edition of my Light Art in Italy publication, the one that spans between 2015 and 2016, begins with the works of Luce4Good - Light Art Ensemble 2015, which took place in Milan in December 2015 at the former San Carpoforo church in the Brera district; an event whose realization was due to the concurrence of different factors, disciplines and sectors, and I believe that multidisciplinary is a fundamental need of the contemporary society. The main scope of the exhibition was to support the Pink is Good project of Fondazione Veronesi for the scientific research aimed at finding a cure against the breast cancer. For an exhaustive description of the exhibited works, you should kindly refer to the context of this book; here I wish only to mention that the artists accepted with enthusiasm to take part in it and released site-specific works that were accompanied by video shots by the same artists. By means of the language of light they expressed either their viewpoint or experience with that illness - the subject of the research - or the topic of womanliness. Someone did it in an explicit way, such as in the case of the luminescent porcelain breast by Nicola Boccini, or the breast-hill of Donatella Schilirò, watered by the knowledge’s light. Quite strong was the message of Federica Marangoni, with her Murano glass hand, obtained from a cast of her hand, standing open in front of a red NO as in the gesture of stopping the illness. The same graphic sign, by chance, inspired also Arthur Duff for his luminous structure made from a very thin neon light tube. For LeoNilde Carabba the healing of the body must take into account also the soul, the psyche, as expressed by the esoteric quotations that could be read in her work. It derives from the world of flowers the femininity of the Maria Cristiana Fioretti’s and Nicola Evangelisti’s works, with hints to the pink colour that marks out Pink is Good. With his snake Nino Alfieri alludes to the cyclical nature and its recovering capability, besides referring to the Caduceous of Hermes or the Blacksnake coiled around the Aesculapius stick, both symbols of the art of preparing ailments. Also Marco Brianza in his video refers to an ailment, the food, drawing ispiration from the dietary advice of Fondazione Veronesi. Lastly, Carlo Bernardini in his work expresses the metaphor of the shadow that, despite being projected on the surfaces of a space, it is not able to cross it: only light remains. Translated to the exhibition topics, that strengthens the message of hope that the darkness of the illness will be defeated by the light of the knowledge. Luce come progetto di vita L’ottava edizione della mia pubblicazione Light Art in Italy, quella a cavallo degli anni 2015 e 2016, si apre con le opere della mostra “Luce4Good - Light Art Ensemble 2015”, realizzata a Milano nel Dicembre 2015 nella ex chiesa di San Carpoforo in Brera; un evento nato grazie alla convergenza di fattori, discipline e settori diversi ed io credo che la multidisciplinarietà sia una esigenza fondamentale della società contemporanea. Lo scopo principale della mostra era quello di supportare il progetto Pink is Good della Fondazione Veronesi per la ricerca scientifica indirizzata alla cura del tumore al seno.